The S&P Global Infrastructure Index generated a 9.6% total return in Canadian dollars year-to-date, despite peaking early in June and moving sideways through the third quarter of 2017 (see Exhibit 1 below). 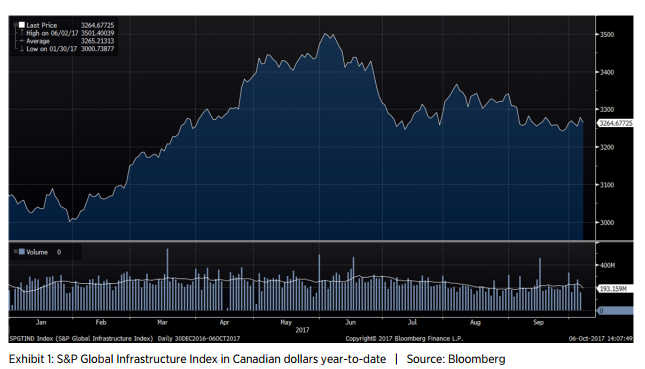 At the sub-industry level, European toll roads have been the clear performance winners. Essentially, traffic volumes continued to recover and toll rate increases translated into revenue growth for the concession owners as economic growth improved across continental Europe. Airport services have also been strong performers on a year-to-date basis, however most have corrected from the highs reached mid-year. The pullback can be blamed on slowing passenger traffic growth coinciding with generally full valuations. Oil & gas storage & transportation continued to be a drag on the index, with most major US pipelines and MLPs still in negative territory for the year despite the recent rally in crude oil prices.

In term of country-specific returns, Europe was the place to be, with Germany, Italy, France and Spain outperforming, driven by each country’s relatively large exposure to pure-play toll roads and airports. Unsurprisingly, Canada and the United States remain near the bottom of the performance rankings, given North America’s significant exposure to the energy sector.

Overall, the macroeconomic environment, ignoring any temporary impact from unpredictable geopolitical events, is generally quite positive for both equities and income-producing securities. Again, we would point to the relatively flattish US yield curve as evidence of a slower growth, lower interest rate environment (see Exhibit 2 below) for the foreseeable future. 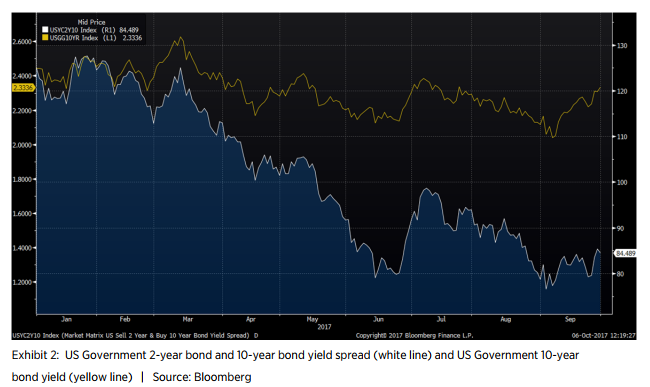 From a Canadian investor’s perspective, currency movements can have a large impact on investment returns and the surprising change in the domestic monetary policy narrative last June was discussed in a prior commentary. The Bank of Canada subsequently followed through on its promise to remove 50 basis points of emergency stimulus and hiked rates in July and September, in 25 basis point increments. Although the Canadian dollar strengthened immediately following the pivot from an easing bias to a tightening bias last June, the second leg of strengthening in September was less intuitive (see Exhibit 3 below) considering that market participants should have been well aware of the Bank of Canada’s intentions. 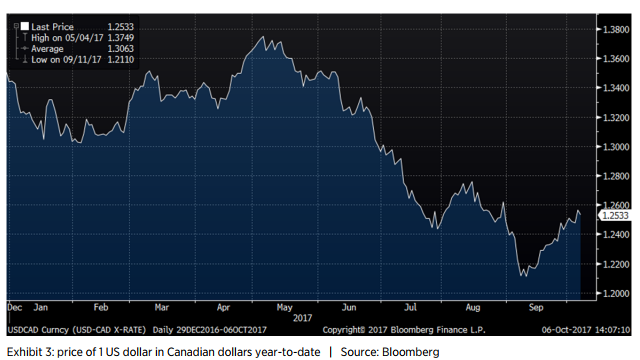 However, the odds of additional rate hikes are in question given more recent comments out of the Bank of Canada regarding the strengthening Canadian dollar and its negative impact on exports (down 1.0% on a month over month basis and down 0.2% on a year over year basis in August) and the Country’s trade balance ($3.4 billion trade deficit in August, worsening from the $2.98 billion trade deficit in July). With falling expectations for rate hikes in Canada and rising expectations for rate hikes in the United States over the balance of the year, the Canadian dollar may weaken slightly from current levels.

As we’ve discussed previously, The Sprott Global Infrastructure Fund has taken a total infrastructure approach, broadening the investable universe to include businesses that share similar attributes as traditional infrastructure investments.

Top contributors to the year-to-date performance of the Sprott Global Infrastructure Fund included Atlantia (+87 bps), Vinci (+84 bps) and Visa (+81 bps). Top detractors year-to-date included Macquarie Infrastructure (-48 bps), Keyera (-37 bps) and Nextdc (-36 bps). Note that we have eliminated our positions in both Macquarie and Nextdc due to stock-specific factors that led to the disappointing performance.

In September, the Group made a voluntary tender offer for the entire issued share capital base of Abertis (ABE SM). It is a full cash offer, capped at 90% of the total shares outstanding at a price of €16.50 per share of ABE, subject to a minimum acceptance of 50% +1 total shares. There is a partial share alternative available, limited to 23% of total shares, with an exchange ratio of 0.697 ATL shares per share of ABE. The transaction has just received approval from the Spanish Stock Exchange Commission and the acceptance period of the offer extends through October 24, 2017, with closing expected in the fourth quarter of 2017.

The rationale behind the acquisition is twofold. First, the transaction provides geographic diversification to fourteen new countries with over 9,000 km of toll roads, creating the largest global transportation infrastructure owner by EBITDA. It expands Atlantia’s development pipeline of new projects significantly, adding approximately €4 billion of expansion opportunities to an already robust backlog. Second, the transaction significantly lowers the combined entity’s cost of debt, from 4.5% to 3.6%, pro-forma the underwritten credit facilities tied to the deal. Management has been extremely clear that the transaction, once closed, will be accretive to dividend per share growth. They explicitly highlighted the “potential for additional dividend per share growth of up to 30% from year 1 on top of the current dividend policy”.

We are supportive of the transaction and hope the deal closes before yearend, as expected. However, we acknowledge the potential risk of a competing bid and, in light of the stock’s solid performance yearto-date, we have trimmed some of our position.

Although the S&P Global Infrastructure Index experienced relatively disappointing performance in Canadian dollar terms since mid-year, we are pleased to have gained some ground relative to the benchmark. Through the remainder of the year, we may employ tactical currency hedging in order to mitigate foreign exchange related volatility and protect some of these relative gains.

The FED is expected to hike rates at least one more time in 2017 but the yield curve should remain relatively flattish since inflation expectations remain subdued. However, we suspect that the Bank of Canada may be on hold for the balance of the year, having already removed 50 basis points of emergency stimulus.

Based on the composite PMI data from September, the US and the Eurozone are both still in expansion territory at 54.8 and 56.7 respectively. Earnings growth is expected to remain positive for the balance of 2017, with the S&P 500 (adjusted for companies with negative earnings) at 17.6% and the MSCI World at 22.9%. However, with the S&P 500 trading at a forward P/E of 19.3x compared to the MSCI World at 17.75x, we currently see more attractive valuations relative to growth expectations in Europe.

The Sprott Global Infrastructure Fund was concentrated in 30 positions as at September 30, 2017 with the top 10 holdings accounting for approximately 38% of the fund. Over the past year, 23 out of our 30 holdings have announced a dividend increase, with an average hike of 13.4%. Using a total infrastructure approach, we will continue to apply a disciplined investment process, balancing valuation, growth and yield in an effort to generate solid risk-adjusted returns.

Ninepoint Partners LP is the investment manager to the Ninepoint Funds (collectively, the “Funds”). Commissions, trailing commissions, management fees, performance fees (if any), other charges and expenses all may be associated with mutual fund investments. Please read the prospectus carefully before investing. The indicated rate of return for series F units of the Fund for the period ended September 30, 2017 is based on the historical annual compounded total return including changes in unit value and reinvestment of all distributions and does not take into account sales, redemption, distribution or optional charges or income taxes payable by any unitholder that would have reduced returns.  Mutual funds are not guaranteed, their values change frequently and past performance may not be repeated. The information contained herein does not constitute an offer or solicitation by anyone in the United States or in any other jurisdiction in which such an offer or solicitation is not authorized or to any person to whom it is unlawful to make such an offer or solicitation. Prospective investors who are not resident in Canada should contact their financial advisor to determine whether securities of the Fund may be lawfully sold in their jurisdiction.