This month, performance for the fund was flat; strength in investment grade (IG) and preferred shares was offset by softer high yield (HY). As discussed last month, we took profits on our USD position around $1.28 USD/CAD. The fund now has a negligible 1% net position in foreign currency and we expect to maintain this stance for the foreseeable future.

After months of reducing HY exposure, we feel vindicated by the recent price action. This month, weakness started in health care (poor earnings) and telecom (idiosyncratic events), before spreading to the rest of HY. All in, cash spreads widened by 50bps before reversing most of the move, a sign that the buy the dip mentality is alive and well. Given the shallowness of the selloff, we elected to stand by and let the dust settle.

Looking ahead towards next year, we see no reason to alter our macro view:

If we are right, this implies higher interest rates (long and short term), and lower bond prices. Accordingly, we currently carry a mix of low duration investment grade securities, floating rate bonds, less high yield and more cash, so that when opportunities arise, we can act from a position of strength.

Globally, inflation has been missing-in-action since the Great Financial Crisis (GFC). Until more recently, central bankers have been of the view that slack in the labor markets was responsible for this low inflation phenomenon. However, Chair Yellen at the September FOMC press conference, expressed doubts in their ability to understand the low inflation of recent years, coining it the “inflation mystery”. Central bankers have deep rooted beliefs in the so-called Phillips Curve, which links labour market conditions (i.e. unemployment) with inflation, and this relationship appears to be broken. An alternative explanation is that domestic labour market conditions have little bearing on domestic inflation because of globalization. In a world where supply chains span many countries, companies can substitute labour and capital from high cost countries (i.e. tight labour market, high capacity utilization) to lower cost ones (i.e. looser labour market, low capacity utilization). This is called the Globalization of Inflation Hypothesis, and it is gaining traction amongst academics and practitioners1. If this hypothesis is correct, then it is slack or tightness in economies globally that matters.

Investigating this further, we find that the global economy is using up excess capacity for the first time since the GFC. Figure 1 below shows the percentage of OECD countries (a group of rich countries) where the output gap is positive (i.e. GDP is higher than potential, indicating that the economy is operating above capacity). According to the OECD’s November 2017 Economic Outlook, we should expect that over 50% of OECD countries will have closed their output gap in 2018, increasing to 67% in 2019. 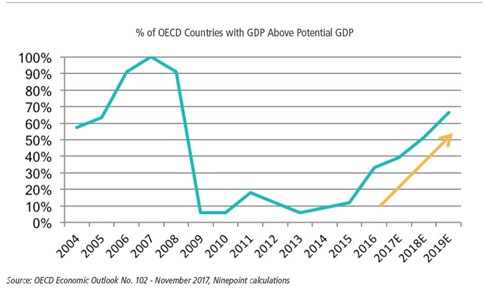 Interestingly, labour markets are showing even tighter conditions than output gaps. Figure 2 presents the % of the same OECD countries where the unemployment rate is below what is estimated to be their natural rate of unemployment2. If the OECD projections are correct, in 2018 we should reach 75% of countries operating with what is considered very tight labour markets, a level not seen since 2007. 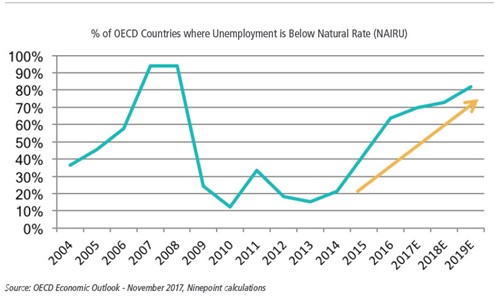 It is very clear from Figures 1 and 2 that we are late in the economic cycle. So while central bankers might be puzzled by low inflation, we believe that, more likely than not, it will start showing up again in the developed world by mid- 20183. And since those same central bankers have all shown a preference for the removal of monetary accommodation (Fed, BoC and BoE raising rates, ECB tapering QE, etc), we believe that higher core inflation would vindicate them in their tightening bias, leading to further policy normalization and higher interest rates, across the curve.

Finally, against this backdrop of rising rates and inflation globally, we believe that credit (particularly long dated) will face headwinds, is priced to perfection and hence vulnerable.

As G-4 central bank balance sheets finally stop growing, net bond issuance is set to almost double next year (Figure 3). Unless demand from investors rises up to the occasion, simple supply/demand economics dictates that bond prices should adjust (down) so that the market clears. In addition, U.S. tax reform, if it passes, contains multiple provisions that have the potential to hurt bond markets. For example, in their current form, both the House and Senate bills restrict interest expenses at 30% of operating earnings, which for some HY issuers mean a higher tax bill and less cash flows to service their obligations. 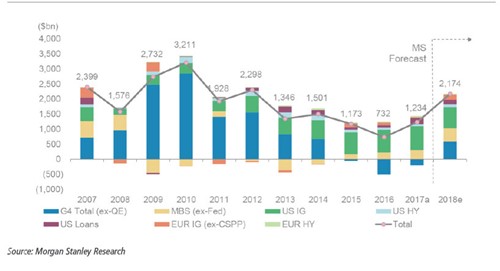 Equally important, the move to a territorial tax system and the mandatory repatriation and taxation of foreign profits means that cash rich companies such as Apple and Google will no longer need (or want) to maintain foreign profits in the form of cash and investments offshore to avoid paying taxes on it. For example, Apple as of the end of September 2017, has a stockpile of $268bn in marketable securities, of which $153bn is in corporate bonds, the majority of which ($126bn) in long term corporate bonds4. Apple is not an isolated case, as it is estimated that more than $2.5 trillion of foreign earnings sit offshore (of which $1.3tn is held in cash and bonds)5. As these companies are forced to pay cash taxes on those accumulated foreign earnings, they will likely start selling those corporate bonds to pay their tax bill, driving further supply in the market for years to come6.

Furthermore, the overall quality of the bond indices has deteriorated. For example, the US investment grade universe (this is also true of HY) has a lower yield (3.2%), higher median leverage (2.4x gross/1.9x net), lower credit rating (A-/BBB+) and higher duration (7.3 years) than at any other point this late in the past 3 cycles (see table below). Moreover, BBB credits now make up almost 50% of the universe, up from 28% in the late 1990s. In other words, compared with similar points (cycle tights in spreads) in previous credit cycles, the US IG universe has more interest rate and credit risk, with a lot less yield. Adjusting spreads for overall index quality, they are currently as tight as they can go. 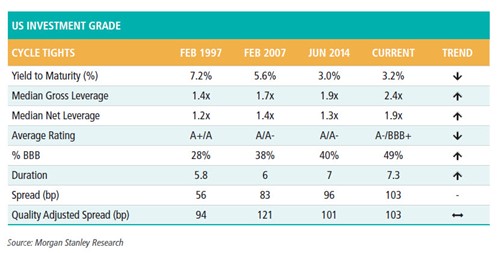 So, at the risk of repeating ourselves: bond ETFs and benchmark bond funds have too much duration, have reached out on the credit curve to increase yield and have lower overall credit quality.

Particularly at this point in the cycle, active beats passive.

Given our outlook, we continue to sell down high yield, increase our allocation to short dated investment grade bonds and take tactical positions in negative duration preferred shares. We are also entering into credit hedges for our portfolio, using options on U.S. investment grade indices, taking advantage of low implied volatility and high absolute prices. Currently, we believe that using U.S. IG for hedging offers a compelling risk-reward, given its longer than usual interest rate sensitivity and very low credit spread. Finally, we stand ready to deploy cash once rates are higher and spreads wider, and in the meantime use short term corporate bonds and BA’s to minimize cash drag, keeping duration and credit risk low.

We’d like to take this opportunity to thank our investors for their continued support and wish you and your family Happy Holidays and a prosperous 2018. 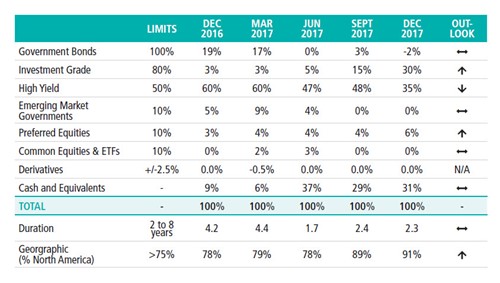