2017 was a good year for the Diversified Bond Fund, with a return of 5.34% post fees and realized volatility of 2.33% (F Class). Gains were broad based, driven by strength in credit and our conservative duration exposure. By contrast, broader bond indices such as the FTSE TMX Canada Universe Bond Index returned 2.52% for the year, with a realized volatility of 4.8%. Consequently, we delivered on our objective of providing more income with less volatility.

So far in 2018, our defensive duration positioning is paying off: government bonds are selling off across the world, driven by strong economic performance, commodity prices, higher inflation expectations, fiscal stimulus and their associated deficits (tax cuts in the U.S.), as well as Central Bank posturing.

In Canada, the unemployment rate is now 5.7%, the lowest it has been since the Great Recession. The December employment report was solid, with another large increase in full time jobs. Additionally, the most recent Business Outlook Survey suggests the Canadian economy now operates close to, or even above, it’s productive capacity. This, coupled with oil prices above $60 a barrel, resulted in a stronger Canadian dollar so far this year. Accordingly, the bond market is now pricing in three rate hikes in Canada this year. Given this backdrop, we maintain currency hedges on practically all our USD positions.

In the U.S., fiscal stimulus has finally been signed into law. In the short term, this will give a boost to economic activity, driving capacity utilization higher. The resulting increase in the fiscal deficit also means an increase in the supply of Treasuries, at the same time the Fed is winding down part of its balance sheet. Ultimately, we should expect to see more inflation out of the U.S., and this is why inflation compensation and long term bond yields have moved up in December. In the short term, these dynamics argue for a steeper yield curve. However, once the Fed realizes it’s behind the curve on inflation, we should see a resumption of the curve flattening environment until the end of the cycle.

We continue to hold on to the option hedges we had entered into late last year. They are now in the money and have contributed to portfolio stability in this recent period of interest rate volatility. Since the beginning of the year, High Yield and Investment Grade credit spreads have tightened even further and now sit at their cycle lows. We continue to reduce credit risk in the fund by substituting high yield for investment grade exposure. In the coming weeks, we will look to enter into credit hedges, placing us in a strong position to buy credit, should prices finally become more attractive.

With the portfolio up nicely so far this year, we are acting from a position of strength and intend to take advantage of higher investment grade bond yields. We are selectively deploying cash in short and medium term investment grade credits at yields above 3%. 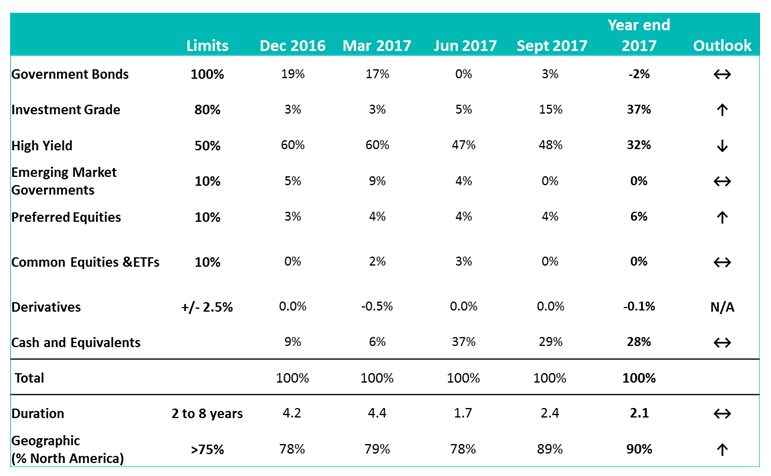