February saw volatility come back with a vengeance: while the volatility index (VIX) had not been above 15 for all of 2017, it exploded to 50 early in the month, and at the time of writing remains above 20. Against this challenging backdrop, the fund returned 9bps, bringing our YTD return to 41bps. By contrast, the Barclays Canadian Aggregate index returned 14bps, and -72bps YTD. The general risk off environment in February meant government bonds performed reasonably well. HY and preferred shares were small detractors to performance; but were more than offset by gains in investment grade and credit hedges.

What drove this sell-off in February? Initially higher bond yields, driven by higher inflation expectations, finally spooked equity markets and triggered a massive rush to the exit from a multitude of technical investors (CTAs, risk parity, short volatility strategies, etc.).1 In credit, high yield funds saw the largest redemptions since 2008, driving spreads wider. Fundamentally, nothing had really changed, but risk assets were priced to perfection and investors, collectively, were too long.

More recently, to add fuel to the fire, the Trump administration has decided to make good on its protectionist and mercantilist agenda, and is now promising “good” trade wars. The first salvo was launched against steel and aluminum, with across-the-board tariffs at a proposed rate of 25% and 10%, respectively. Interestingly, at this point, the US administration has decided not to exempt Canada and Mexico, casting additional doubt on the future of NAFTA.

These recent developments are most troubling to us. The Trump administration has made it clear that this is only the beginning, and that China is next. It appears as though moderates are losing ground to the mercantilists inside the White House. Retaliation by the U.S.’s trading partners is the most likely outcome of these trade actions and will eventually result in higher inflation and lower economic growth. China is not only a major trading partner to the U.S., but they have also made clear that they could use their holdings of U.S. Treasury Securities as a weapon in a potential trade war.

For now, central bankers, particularly at the Fed, seem undeterred by market volatility. Case in point, on February 8th, with the S&P 500 down ~10% from peak, William Dudley, the President of the New York Fed, called the selloff “small potatoes”, adding that the economy is strong and that rates need to go up further. The new Fed Chair, Jerome Powell, echoed a similar tone in his inaugural Congressional hearings. The market is catching up to us, and is pricing in roughly 3.5 U.S. rate hikes in 2018 (up from 3 not so long ago). The risk is now for the Fed to signal four rate hikes (our base case) as they update their economic projections at the March FOMC meeting.

However, we now expect a change of tone at the Bank of Canada. The most recent economic data (GDP and jobs) was rather weak and, with the trade rhetoric heating up south of the border, we believe that Poloz risks sounding dovish. This dynamic has been partially reflected in the markets, as expectations for BoC rate hikes have now been pushed down (lower probability) and out (second half of 2018).

Against this rather bearish outlook, we continue to let HY mature and get called away. We expect roughly one third of our HY exposure to get paid back in the next twelve months. For context, Table 1 below shows what our HY looks like versus the index. We have a better credit rating, less duration and credit spread. By the time the next downturn hits (our best guess is 2020), most of it will likely have been redeemed.

Over the past few months, we have been adding to our floating rate notes (FRNs), which increase yield while maintaining low duration. About 10% of the portfolio is now in FRNs.

In investment grade (IG), we are very selectively adding new positions. As of late, new issues have been behaving poorly, signaling to us that the recent underperformance of most bond funds, coupled with large deal volume might have saturated the market for now.

Given our increasingly cautious outlook, we like our portfolio positioning right now as we take a wait-and-see approach to the current volatility. 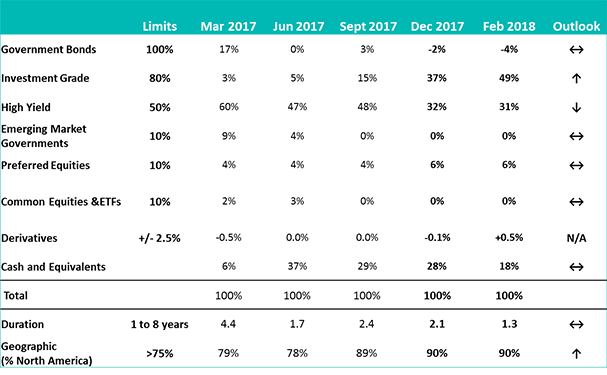 1For more details on this, we recommend reading the Enhanced Equity Funds February Commentary.