As discussed in our February commentary, trade wars and political instability accelerated in March. We saw a worsening of the NAFTA rhetoric, the exit of moderate presidential advisors such as Gary Cohn and Rex Tillerson, and most importantly, the clearest manifestation yet of significant trade actions against China.

Evidently, this spooked investors and drove a significant flight to safety; government bonds rallied while credit spreads widened and equity markets sold off. While we were expecting a negative market reaction from the amplified trade pressures, the magnitude and velocity of the move was somewhat surprising. Given our fund’s positioning, we suffered a 14bps loss during the month, while the Bloomberg Barclays Canadian Bond index rallied 80bps (Figure 1 below shows our YTD performance against the index). 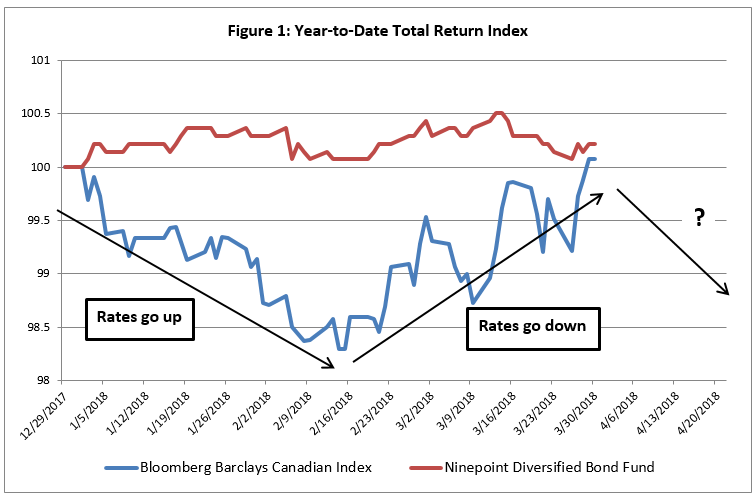 Most of the index gains were driven by long term government bonds (i.e flight to safety), where we have almost no exposure. In the fund, gains in our investment grade (IG) bonds were offset by mark to market losses in our high yield (HY) and preferred share portfolios. In HY, as discussed last month, the portfolio is defensively positioned (2 years duration), so we expect these mark-to-market losses to be reversed in future months as these bonds pull to par (i.e. get closer to maturity and hence par value of $100). In our (small) preferred share portfolio, we are positioned to benefit from higher interest rates, so losses were driven by both lower rates and higher credit spreads. Reflected in our month-end duration of 2.3 years (see the Portfolio Characteristics Table below) is a small defensive option position in TLT (long duration US government bond ETF), which was closed for a profit early in April. The current duration of the fund is 1.7 years.

All things considered, we see no reason to change our stance; rates, while volatile in times of market stress, are going up. We got further evidence of this urge to raise interest rates at Jerome Powell’s first FED meeting as FOMC Chair. While they are still signaling a total of three rate hikes this year, the Fed raised its forecast for 2019 (3 hikes) and 2020 (2 hikes), taking the Federal Funds Rate to 3.5% by 2020. Interestingly, their own assessment of the long term neutral rate of interest is 3%; so this forecast implies that by 2020, they will be effectively pulling the brakes on the economy, just as the fiscal stimulus tapers off. Given this backdrop, our best guess remains for a recession in 2020.

In the meantime, global growth is strong but moderating. Risks of trade wars remain the biggest unknown this year, but in our view this recent sell-off in markets means it has been factored in. At this juncture, a resolution (at least in principle) on NAFTA seems possible by the end of April. Moreover, the U.S. and China are in discussions on trade and the actual implementation of tariffs seems a long way off. If recent actions are any guide, the Trump administration barks loudly on trade to satisfy its political base, but seems intent on negotiating reasonable trade deals. At least for the near future, we expect risk assets to pay less attention to trade rhetoric out of Washington.

So where does that leave us? We continue to add to IG, let HY mature and sell longer dated holdings on rallies. We are happy with our current preferred shares holdings; while only ~6% of the fund, they yield over 5.5%, have duration of -3.3 years and are well laddered this year and next. Finally, with an overall yield to maturity of 3.7% and about 15% of the fund invested in Floating Rate Notes (FRNs), we feel well positioned for further increases in interest rates. 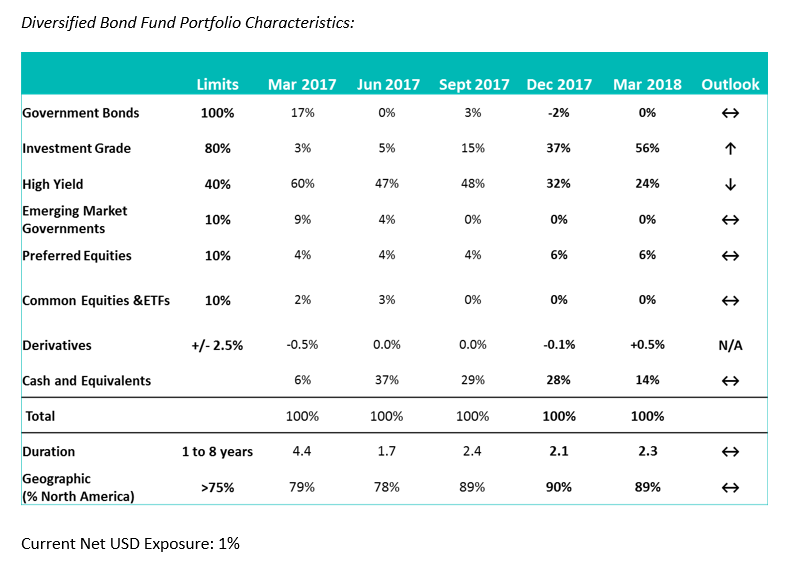