Below is an article stating that Saudi Arabia is targeting $80/bbl and reinforces our theme of dramatic under-investment on the part of the oil industry over the past several years that will lead to a supply shortage in the near future.

This $80/bbl oil price is modestly higher than our short-term internal forecasting based on inventory analysis ($70/bbl WTI by YE’18 and $70/bbl WTI average in 2019). We remain convinced that barring a global recession that we remain in a multi-year bull market for oil. Demand is surging and the global oil supply chain will lack the ability to respond quickly enough beginning in 2019. At $70/bbl E&P’s are trading ~3.5X EV/CF and our service names are trading at 2.0-2.5X EV/EBITDA implying more than 100% upside in many of our Fund holdings.

Importantly we see the oil bull market lasting for at least 4-5 years given this is the fastest that industry will be able to respond to the price surge in late 2019 (likely higher than $80/bbl). In the next few weeks we will be entering into peak demand season for oil… for anyone underweight/market weight the sector now is the time to add exposure. 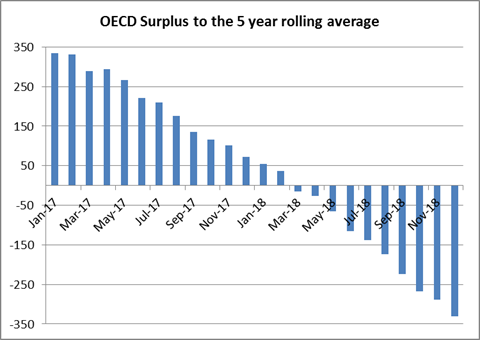 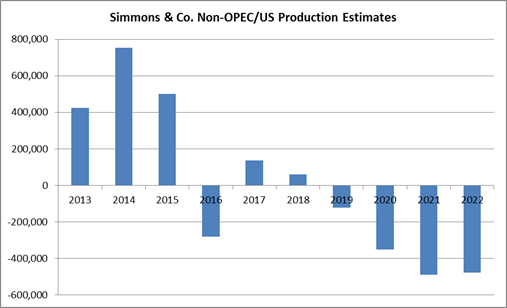 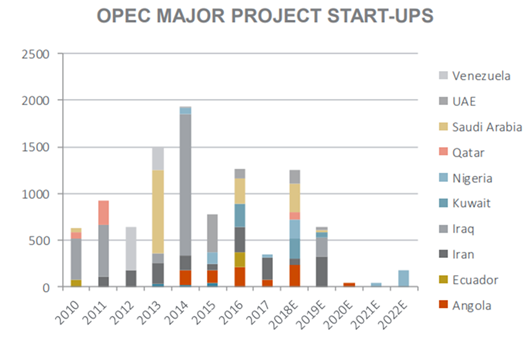 Saudi Arabia Is Said to Signal Ambition for $80 Oil Price

(Bloomberg) -- Saudi Arabia wants to get oil prices near $80 a barrel to pay for the government’s crowded policy agenda and support the valuation of state energy giant Aramco before an initial public offering.

In conversations with OPEC delegates and oil market participants, Saudi officials had been careful to avoid pinpointing an exact price target. Yet people who have spoken to them said the inescapable conclusion from the conversations was that Riyadh is aiming for $80.

The private discussions, relayed by several people who met the Saudis over the last month and asked not to be named to protect their relationship with the kingdom, chimes with the hawkish tone in public from Saudi officials.

In an interview with Time magazine last week, Saudi Crown Prince Mohammed bin Salman made the first public statement linking his expectation of higher oil prices with the timing of the initial public offering of Saudi Aramco.

"We believe oil prices will get higher in this year and also get higher in 2019, so we are trying to pick the right time," he told the magazine in reference to the IPO. Riyadh, which initially targeted the second half of 2018 for the listing, is now aiming for next year.

Saudi Oil Minister Khalid Al-Falih has also sounded increasingly hawkish in public, suggesting that OPEC should keep tightening the oil market even through the cartel is close to meeting its goal of cutting crude inventories in industrialized countries back to their five-year average.

In an interview in New York last month, he said today’s price near $70 a barrel hadn’t been sufficient to stimulate investment in the industry, which remains significantly below levels seen before 2014’s price crash.

"That tells me that the pricing signals that have come out of the recovery haven’t been sufficient," he said, without giving a target for prices. The Saudi Ministry of Energy didn’t immediately respond to a request for comment.

Riyadh’s desire for higher prices is driven by domestic policy imperatives. Although Saudi Arabia’s budget deficit has narrowed sharply as oil has recovered, Prince Mohammed has set out an ambitious and expensive economic and social reform program. He also needs to pay for the kingdom’s increasingly drawn-out military entanglement in Yemen.

While there’s little indication the Saudis are prepared to deepen their oil cuts to achieve $80, at the very least the aspiration suggests they’ll keep with the current measures until the price goal is closer. Riyadh is counting on declining Venezuelan oil production, the likely imposition of new U.S. sanctions on Iran, and continued demand growth to absorb U.S. shale production.

The Saudi strategy, which isn’t universally shared within OPEC, the same people said, carries risk as it could further boost U.S. production, already at a record of 10 million barrels a day.

Current oil prices below $70 a barrel have already propelled drilling in the prolific shale regions of the Permian, Bakken and others. The number of oil rigs in operation in the U.S. last week rose to 808, up nearly 20 percent from a year ago and the highest since 2015.

So far, Riyadh has public support from other OPEC countries for continuing the cuts, but privately some nations are increasingly worried that Saudi Arabia is trying to boost oil prices too high, the same people said.

For the kingdom, the most important thing is to keep Russia supporting the current OPEC and non-OPEC production cuts. So far, Moscow has backed Riyadh, at least in public, with Russian Energy Minister Alexander Novak saying that the alliance between the cartel and Russia that coordinated historic oil-output cuts could last "indefinitely."

Ninepoint Partners LP is the investment manager to the Ninepoint Funds (collectively, the “Funds”). Commissions, trailing commissions, management fees, performance fees (if any), other charges and expenses all may be associated with mutual fund investments. Please read the prospectus carefully before investing. The indicated rate of return for series F units of the Fund for the period ended March 31, 2018 is based on the historical annual compounded total return including changes in unit value and reinvestment of all distributions and does not take into account sales, redemption, distribution or optional charges or income taxes payable by any unitholder that would have reduced returns. Mutual funds are not guaranteed, their values change frequently and past performance may not be repeated. The information contained herein does not constitute an offer or solicitation by anyone in the United States or in any other jurisdiction in which such an offer or solicitation is not authorized or to any person to whom it is unlawful to make such an offer or solicitation. Prospective investors who are not resident in Canada should contact their financial advisor to determine whether securities of the Fund may be lawfully sold in their jurisdiction.