May was a game of two very different halves; first we saw a rally in risk assets, with the S&P 500 and oil prices up as much as 5%, and 10 year bond yields in the U.S. flirting with 3.15%. This was quickly followed by a sharp reversal, with yields down almost 40bps and oil prices down over $7 in less than 10 trading sessions. We think that oil prices have been a significant contributor to market sentiment recently, supporting risk assets on the way up, and vice-versa on the way down. So we believe a short explanation of recent developments is important.

It had become market consensus that oil prices needed to rise because demand was outstripping supply, that U.S. shale wouldn’t be as responsive as initially feared, and that the OPEC/Russia production cuts would continue to support the market. Additionally, with Trump withdrawing from the Iran Nuclear Agreement and Venezuela descending into chaos, the risk of a serious shortage of supply on the global oil markets was becoming increasingly apparent to market participants. Accordingly, oil prices had been rallying into the $70 range, a level last seen in 2014. Having recognized this dynamic, numerous market participants had been increasing their long exposure to oil prices. As can be seen from Figure 1 below, speculative (Hedge funds, money managers, etc) positioning in oil (WTI) futures had been sitting at an all-time high since the beginning of the year, reflecting extreme bullishness. 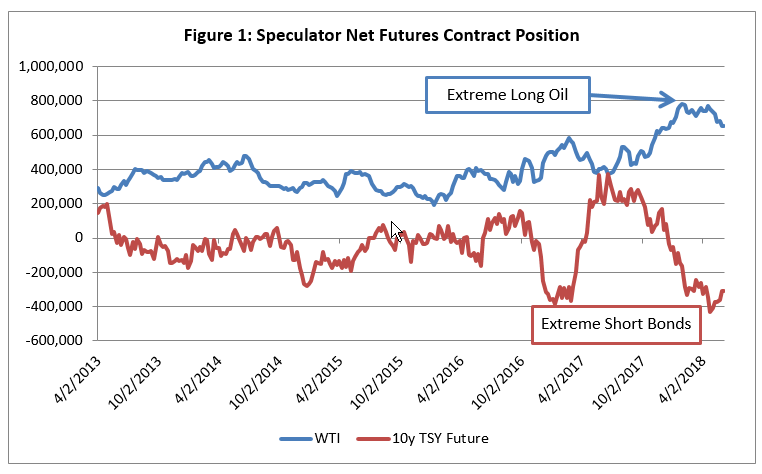 Higher oil prices, in general, also tend to coincide with higher inflation expectations, which subsequently drive nominal bond yields higher. This is also a very popular trade, as can be seen from the U.S. 10-year treasury futures positioning data in the chart below, which is also sitting at multi-year extremes.

Generally, we are wary of investment themes that become too broadly accepted (i.e. consensus), as they are prone to quick and painful reversals; when investors realize they are all on the same side of a trade that doesn’t work anymore, they rush for the exit. With investors collectively extremely long oil and short bonds, which we see as the two sides of the same coin, we didn’t need a large catalyst to trigger an unwind.

First, OPEC and Russia announced that they were contemplating increasing production to offset losses from Iran and Venezuela. Remember, OPEC doesn’t want prices too high as that could destabilize global growth and incentivize a production response from U.S. shale. Then came a few angry tweets by President Trump asking for OPEC to raise production by one million barrels per year. That was enough to precipitate a $5 decline in crude, dragging bond yields lower (through lower inflation expectations) (Figure 2). 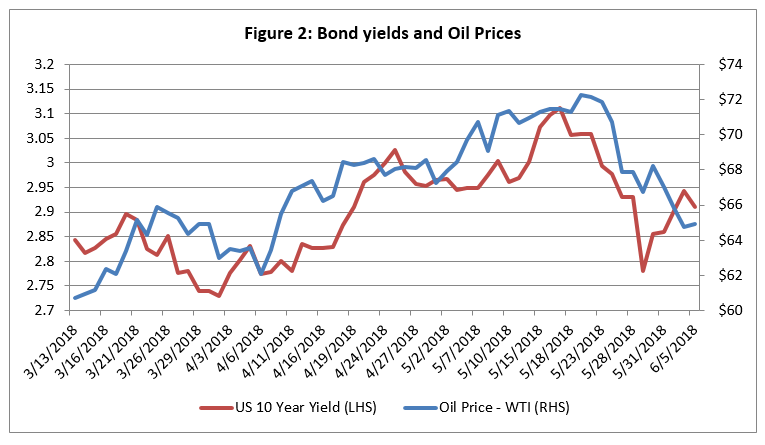 Then came Italian politics, where a month’s long negotiation between two extremist parties to form the next government fell apart, sparking fears of new elections. The Northern League, which has been gaining in the polls, has been advocating an exit from the Eurozone, and new elections would have been seen as a referendum on the country’s membership to the Eurozone. Italian sovereign bond prices fell precipitously, and safe heaven assets rallied, pushing U.S. 10-year treasury yields to as low as 2.75%.

Since then, cooler heads have prevailed and the two parties have agreed to form a government. For now, the worst has been avoided, and that was enough to spark a relief rally.

Nonetheless, at this juncture we see plenty of reasons to be cautious:

In the face of these risks, here is how we have positioned the portfolio: 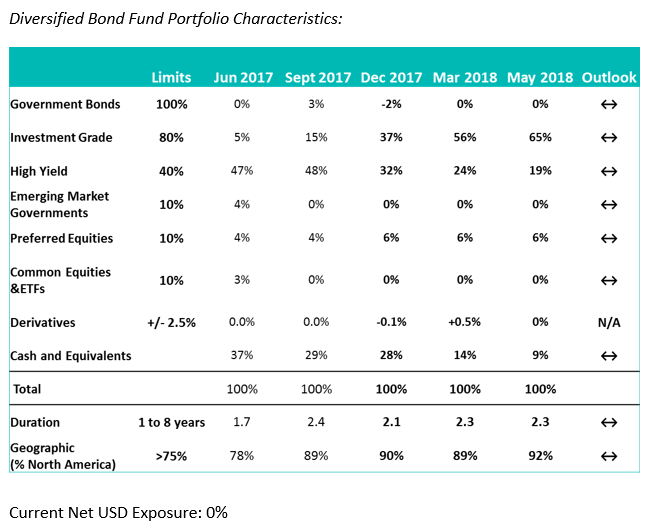