June, like May, was a frustrating month; continued fears of a trade war and somewhat softer Canadian economic data drove a continuation of last month’s rally in long term government bonds and a further widening of credit spreads globally. While the fund continues to grind higher (up 7bps for the month), our low duration stance means we will obviously miss those occasional risk-off rallies in long term government bond prices (in comparison, the benchmark was up 64bps).

But, two months does not make a trend, and as can be seen from Figure 1 below, counter-trend rallies in 10-year bonds happen fairly regularly. So, as highlighted in our May 2018 commentary, we are keeping a close eye on trade tensions and politics, but we see no reason to change our overarching thesis: capacity utilization around the world is high, oil prices are steady, inflation is going up and central banks are raising interest rates. In the short term, risks of trade wars might continue to put pressure on long term yields, but a full-fledged trade war would eventually be inflationary (one could even argue stagflationary).

So far, central bankers seem to agree with us; even with all the noise surrounding NAFTA, the Bank of Canada will most likely raise rates for a second time this year, and the U.S. Federal Reserve is now expecting to take the Federal Funds rate to 2.5% by year end (up another 50bps) and 3.25% by year-end 2019. 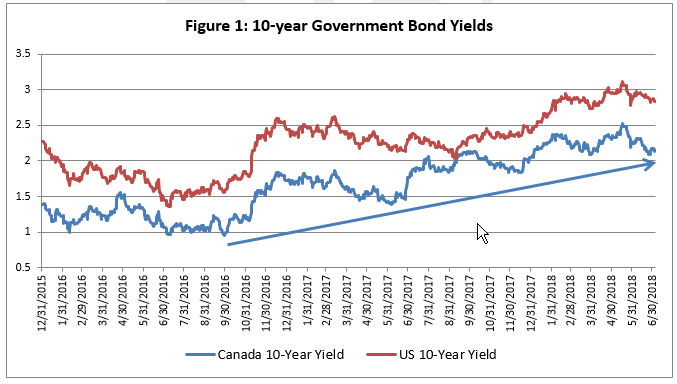 Accordingly, we believe that low duration and a higher quality portfolio are the best way to generate income while maximizing capital preservation. To that effect, early in June we initiated new duration hedges using options on the iShares 7-10 Year Treasury Bond ETF (ticker IEF), reducing the overall duration of the fund to 1.5 years. Additionally, towards the end of the month, we initiated a tactical short in Government of Canada 30-year bonds, further reducing our duration to 1 year. At this juncture, we are content with our mix of investment grade and high yield credit. With yields down so much so quickly, we are selectively deploying cash in shorter dated bonds. When longer term yields reach more attractive levels, we will consider extending the duration of the portfolio. 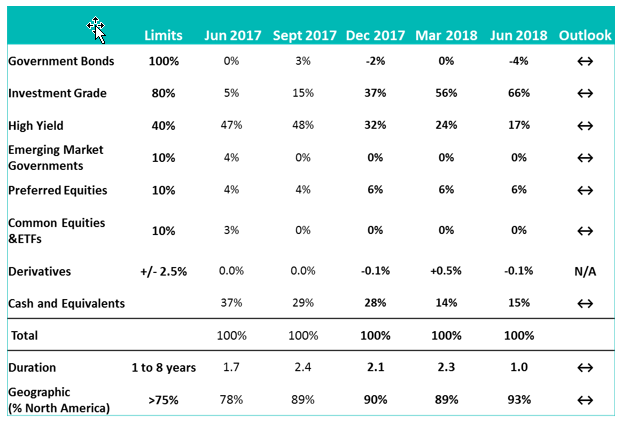