After a tumultuous October, November offered no reprieve. The song remains the same; tariffs, trade wars and the realization that global growth is decelerating led to further equity weakness, credit spread widening (which was notably absent in October) and a rally in government bonds. Oil prices also continued their decline, dropping as low as $50 per barrel (WTI), resurfacing memories of the oil glut[1] of 2015/2016 (Figure 1). In brief, sentiment is terrible. 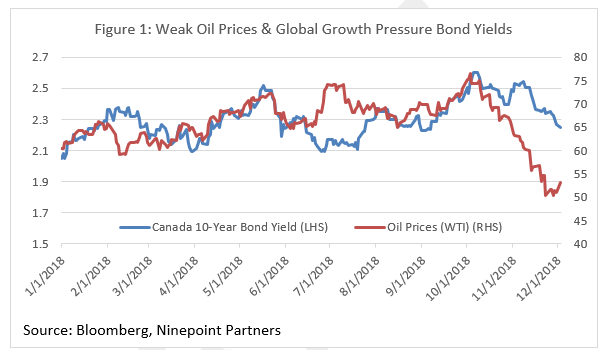 Three catalysts had the potential to turn things around.

First, and this should not be forgotten, part of the current weakness stemmed from what was perceived as a hawkish Fed. Back in October, Fed Chair Powell described the Fed Funds Rate as “a long way from neutral”, which led to a drastic increase in longer term interest rates. The benchmark US 10-year yield went as far up as 3.25%. Since then, and particularly amid the equity sell-off, Fed officials, Powell included, have somewhat tempered their remarks and emphasized data dependence with regards to the future path of interest rates. As of writing, the forward market is pricing only 1 rate hike from the Fed for all of 2019, quite a shift from the roughly three that were previously assumed.

Second, trade, tariffs and the global growth narrative are now firmly intertwined. It is now well understood by market participants that the path of Chinese export tariff increases laid out by Trump will lead to a slowdown for the world economy. As such, the overly publicised dinner between Trump and Xi at the recent G-20 meeting in Argentina raised hope that they could agree to a truce, putting new tariffs on hold and reengaging in constructive negotiations. While a 90-day truce was announced by the U.S. administration, details were sparse and often contradictory, leading market participants to discount a constructive resolution.

Finally, the 30%+ decline in oil prices has had a large negative impact on inflation expectations and led to a widening of credit spreads (particularly HY, more on that below). This is weighing on growth as companies pull back spending plans and adopt a wait and see stance. The December 6th OPEC meeting was particularly important, as the surprise waivers granted by President Trump to importers of Iranian oil have created a supply glut. The world is now looking for OPEC to cut production by approximately 1.4 million barrels per day to restore balance to global oil markets and stabilize prices higher. Closer to home, the decision by the Alberta government to force oil producers to curtail production by 325 thousand barrels per day has already helped crude differentials. These positive developments should lead to an improvement to both sentiment and economic growth in Canada.

In credit, equity volatility and fear of an economic slowdown has led to significant redemptions in ETFs and Mutual Funds, driving credit spreads much wider than warranted by economic fundamentals alone. In high yield (HY), weakness was initially concentrated in energy, but since this sector represents 15% of the index, the impact was relatively large and bled to the rest of the sector. The US HY index is now 60bps wider year-to-date. In the fund, our exposure to energy is split roughly 50/50 between pipeline and E&P producers, each representing about a 5% weight. We will likely be sellers of E&P HY credits on a rally.

In investment grade (IG), several high-profile credit downgrades such as Ford and General Electric (GE), along with a generally downbeat growth outlook, led to about 15bps of credit spread widening. To put this is perspective, Figure 2 shows the monthly changes in Canadian IG spread (in z-scores, or number of standard deviations). In November 2018, IG spreads moved by almost 2 standard deviations, a rare occurrence. The last time we had such a move was back in January 2016, when oil prices were in the mid $20s and the world was seemingly coming to an end. While we do not believe that we are in such a dire situation as 2015/2016, we believe that credit spreads will continue to drift higher for at least another quarter.

We took advantage of this dislocation by buying some short-dated GE (<1 year) bonds at yields above 4.25%, well above what even HY issues of similar maturity yield. While our IG portfolio has generally very low duration, widening spreads always have some mark to market impact. Thankfully, 20% of the portfolio matures within one year and a further 10% within 2 years, so our bonds should pull to par and allow us to reinvest proceeds from maturities at higher yields/spreads as the market drifts wider.

The sore thumb in the portfolio over the past two months has been our modest preferred shares weight (prefs). In November alone, our 3.5% weight detracted over 35bps of performance. While prefs provided HY-like returns and contributed negative duration to our portfolio for most of the year, they have undergone a widespread and rapid selloff. As a hybrid between fixed income and equities, one would expect prefs to behave in a somewhat predictable fashion. Figure 3 below shows the historical relationship (5 years) between the monthly returns of the S&P/TSX Preferred Share Index (vertical axis) and the S&P/TSX Index (horizontal axis). The estimated beta of prefs to equities is 0.6, meaning that for any given month, a decline of 1% in equities should be associated with a 0.6% decline in prefs. In November, while the TSX rallied 1%, prefs declined over 6%. What explains this underperformance? 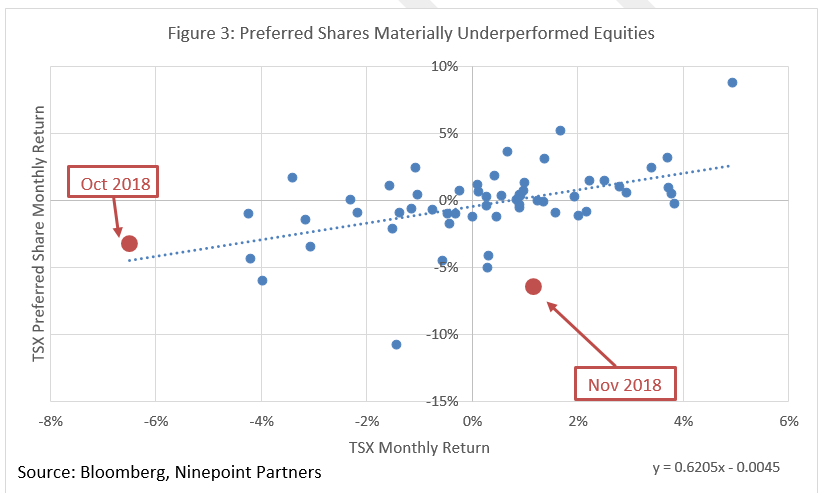 The main culprit is Preferred Share ETFs, which have more than doubled their assets under management in the past two years to peak at around $8.3bn in October 2018. Since then, those same ETFs have suffered $160mm of redemptions, or roughly 2% of AUM. Prefs, unlike bonds or equities, are a rather illiquid asset class; many issuers have several small separate series (for example, Enbridge has 22 different series), leading to a lot of market fragmentation. With the growth in ETFs, many market participants do not own any prefs outright, but rather buy an index through the apparently more liquid ETF market. However, when investors want to sell those ETF units, ETF market makers find themselves indiscriminately selling individual prefs series in a market that is not particularly liquid, leading to price gaps. In the future, we would not be surprised to find HY or Leveraged Loans behave exactly in the same fashion, given the size of some ETFs in the U.S.

Where does that leave us?

The portfolio is well positioned; we have 30% of the fund maturing within the next 2 years, our HY exposure is very low, we have 2.6 years of duration and a 4.5% yield to maturity. As we enter the final stages of the economic cycle, we expect credit spreads to drift wider, offering us attractive all-in yields as we reinvest the maturing inventory of bonds. Fear of recession has led to a rapid decline in interest rates, which we think is overdone. We do expect interest rates to drift modestly higher, at which point we will be extending duration. As for government bonds, we will look to strategically add them to the portfolio in conjunction with our move in portfolio duration. 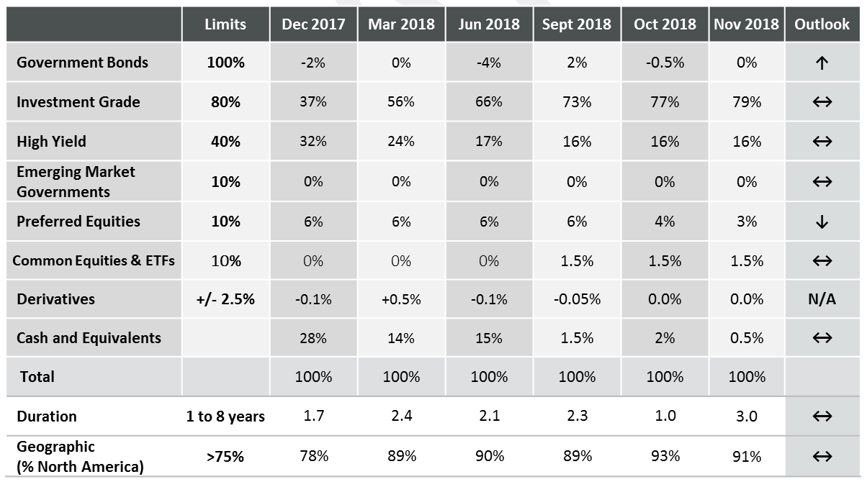 [1] Saudi Arabia had increased production ahead of the implementation of the Iran sanctions to avoid a large price increase due to lack of supply, but was outplayed by Trump who announced surprise waivers.