As far as price action goes, December was an acceleration of what we experienced in November and October. Equity, corporate bonds and commodity prices continued their decline. For bond investors, we at least found some solace in duration, with government bond prices rallying at an incredible speed. For context, the 10-year government of Canada benchmark bond saw its yield compress by 70bps within less than two months (or about 3% price increase) (Figure 1). 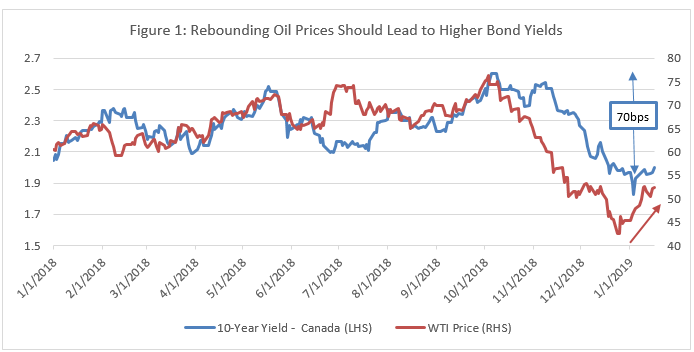 In last month’s monthly commentary, we had highlighted three catalysts that had the potential to turn things around for global markets: a less hawkish Fed (1), progress on trade tensions and green shoots in the world economy (2), and a rebalancing of the global oil markets (3).

1. Since then, the Fed (and the Bank of Canada) have backtracked on their plans to increase interest rates in the near term, firmly re-establishing the Fed Put, which under Chairman Powell was becoming more dubious. Both Central Banks have clearly acknowledged the global economic slowdown and the increased downside risks to the economy. They signalled that they would be patient, wait for incoming data and, given low inflation pressures in the near term, put interest rate increases on hold until the summer. We now believe that the both the BoC and the Fed have about two more rate hikes to go before the end of this hiking cycle, which will probably happen in 2019H2 or early 2020. In Europe, the ECB has stopped purchasing bonds as part of its QE program, but is widely expected to announce another round of TLTRO (cheap term loans to banks to incite them to lend), in effect increasing the size of its balance sheet.
2. While Trump is as unpredictable as ever, it does appear as though he is somewhat wavering on trade issues and could very well accept a diluted agreement with the Chinese only to save face. We know that he sees the stock market performance as a score card of his presidency, and the sharp and deep selloffs we have experienced in the past few months must have had their impact on his state of mind. As for the world economy, China has continued to ease fiscal and monetary policy, which should result in growth bottoming out in the first half of 2019. Additionally, with the Federal Reserve on pause for the foreseeable future, the US dollar should weaken, providing a breath of fresh air to many emerging economies (notwithstanding the additional push from a stronger Chinese economy).
3. As for oil prices, OPEC+ (+ includes Russia) did cut production by a meaningful amount, and it appears Iran wavers might not be extended for very long. Several pundits are now forecasting large inventory draws in the first half of 2019, which should lead prices higher. Technically, long positioning by hedge funds and other investors is at almost record lows, which should provide support to prices if upside momentum picks up (by contrast, last fall long positions by the same investors was at an all time high, which accelerated the downside move in prices). Overall, if the world economy stabilizes and demand grows in line with last year, 2019 should be a decent year for oil prices.

To summarize, we believe that the market fears of late 2018 were overblown, that the policy response (activation of the Fed Put, Trump wavering on trade) and ongoing normalization in China and EM economies should support a synchronized cyclical bounce in economic growth. Our outlook for 2019 is oddly reminiscent of 2016. Accordingly, we would expect yield curves in Canada and the U.S. to steepen modestly (long term rates go up a bit from here as oil prices and inflation expectations normalize, and short-term yields stay anchored due to central banks pausing rate increases) and credit spreads to retrace some of their recent widening. Do not get us wrong, we do not believe that we are out of the woods just yet, this is a process and Trump being Trump, we might have to reassess our view at any time. But, oddly enough, all this turmoil might just have extended the economic cycle by a little bit.

Closer to home, the dislocation in corporate credit of the past few months (see Figure 2) has created some opportunities. We have now seen two back-to-back months with spread increases around 2 standard deviations; corporate bonds are for sale. As we mentioned last month, spreads could continue to be under pressure for a few more months, but the general lack of supply and seasonal money flows means credit could perform very well this year. As our short-term bonds mature, we are redeploying proceeds in new issues that are now starting to come to market with significant concessions. We have lots of liquidity, so we can easily absorb this new supply without the need to sell existing positions.

With the Fed on pause for a few quarters, we are contemplating adding some emerging market exposure to the portfolio. We are currently evaluating a few EM Sovereign USD denominated T-Bills (<1 year to maturity), which yield 4 to 6%. To be clear, we have a 10% limit on EM debt and individual country exposure would not go above 1-2%, so the overall portfolio will remain predominantly North American.

Finally, while we are (and have been) cautious, we feel that the recent price dislocations offer a very attractive entry point for solid returns in 2019.