The recent rout of equity and bond markets has been sudden and relatively severe, across both developed and emerging markets.   The disturbances began in the more fragile emerging markets of Argentina and Turkey this summer, mostly traced to rising U.S. cash interest rates.

If the catalyst for the sell-off was contagion from emerging markets to developed markets, and this caused an abrupt repricing of financial assets, then the cause must be traced to more recent Federal Reserve comments and actions rather than an extrapolation of a trend tightening in US interest rates that hit EM first.

Since the Fed began the process of increasing interest rates in 2015, it has tread a cautious path.  The Fed anchored market interest rate expectations over the degree and pace of tightening by making the eventual equilibrium policy rate, or r*, centre to its communications.  Recently both Chairman Powell and New York Fed President Williams seemed to downplay the role of r*.  This led the market to price-in increased uncertainty over both the Fed’s destination, or the level, for the resting policy rate and the pace at which it expects to get to the end point.

After a period where the yield curve flattened into Fed tightening, the yield curve has now steepened as expectations of real short rates have climbed.  This has had a profound impact on longer term interest rates.  US ten-year interest rates have risen by 30bps since the beginning of September and nearly all the increase has been in real interest rates, consistent with an elevation in short-term interest rates.  This is confirmed by the increase in the term premium of 23bps over the same period.  Moreover, we know that inflation expectations have not moved higher because break-evens, or the market’s pricing of expected inflation over the life of the bond, have not moved up meaningfully.  See Figure 1. 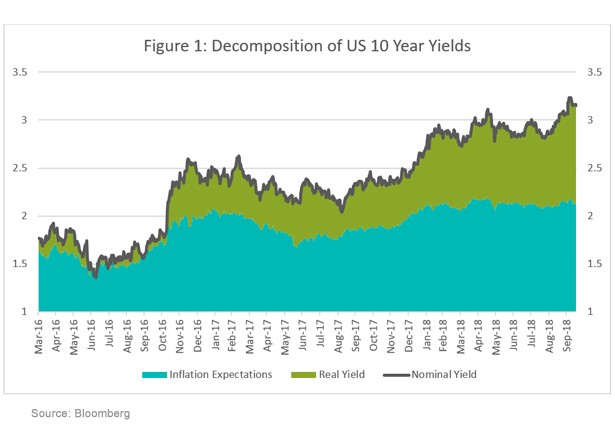 The abrupt change in bond and asset market pricing coincided with some sloppy Fed communications, but the bond-market’s move is not completely detached from economic reality.  The US economy is now in excess demand judging from the tightness of the labour market, which is finally beginning to put upward pressure on the annual rate of wage growth.  Recent data show signs of labour market overheating, and data from the most recent JOLTS survey show that job openings exceed the total number of unemployed.  At the same time, the real, inflation-adjusted, policy rate remains below zero.

On the basis of the decision models at all major central banks, the Fed is stimulating the economy at a time when it should be guiding it to a slower-rate of growth consistent with removing excess demand.  Evidence that policy continues to hold the pedal to the metal comes from the spread between potential GDP growth and real long-term bond yields.  As the chart below shows, potential GDP growth remains above the real rate of interest, a setting generally considered to be highly stimulative. 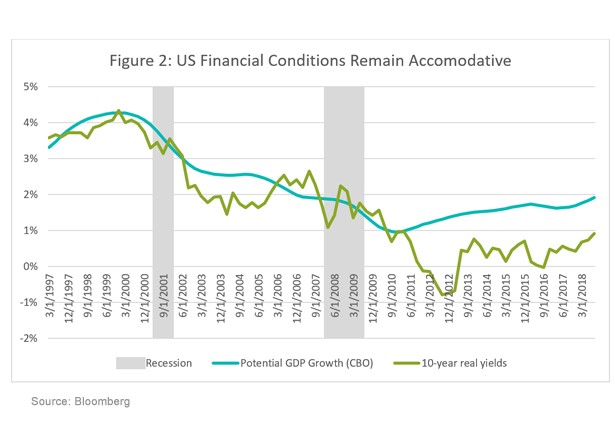 The final piece of the puzzle is inflation.  Market expectations of inflation remain very well anchored at 2.0%, and the market is more likely to respond to recent data surprises than it is to rely on a forecast of where inflation is going, as recent inflation remains very well contained.  This is potentially a grave macro error.  There are long and variable lags between interest rate settings, macro conditions, and today's inflation.  Today’s inflation reflects central bank decisions made, and the macro balance, some 24 to 18 months ago.

The bond market likely should be more circumspect about its inflation pricing.  Not only is the US labour market extremely tight by any historical measure, the heterodox trade and economic policy pursued by the current US administration is playing fast and loose with the US and global economic structure that has kept inflation in check for the past thirty years (i.e. globalization).  Willful political disruption of global supply chains, and the desire to reconnect US demand with domestic production, hints at re-stabilizing domestic demand with domestic wages and prices.  A tight connection between these two factors was behind stubbornly high inflation in the 1970s, and while it would take a long time to reconnect this negative price-wage nexus it cannot be completely dismissed as a risk. We flag this risk because it is not generally appreciated.

We have come a long way quickly in the last 2 weeks, and a relief rally looks likely from these levels.  But upside return expectations for 10-year US Government bonds are probably limited to 10-15 basis points over a short period of time.  Looking beyond the end of this year, short- and long-term interest rates are likely to continue to trend higher until there is evidence that the tightness in the labour market eases.

To manage the evident overheating, real U.S short-term interest rates need to converge closer to the trend rate of growth in the US economy, likely towards 2.0% -- and we are currently at zero.  Unless there is unprecedented political interference at the Fed, the market should expect a continued trend tightening from the Fed -- there is significant room for upside surprise.  While the Fed keeps signalling four further hikes between now and the end of 2019, the market stubbornly prices only three. On balance, we believe that risks are for more, not less than four hikes.

A trend higher in the term premium should be expected, and the market needs to be on guard for upside inflation surprises into 2019 as the impact of idiosyncratic and misguided US trade policy could deliver some unanticipated and negative surprises.