September saw an almost uninterrupted sell-off in global bond markets; yields on 10-year US and Canadian Treasury bonds increased by a whopping 20 basis points (see Figure 1 below). Additionally, through the first week of October, those same yields are up by another 20bps. The backstory is a familiar one: strong economic data out of the U.S., a better tone in Europe around Brexit and the Italian fiscal situation, sanguine central banker speeches, higher oil prices and positive trade developments (NAFTA resolution) all contributed to higher growth and inflation expectations. 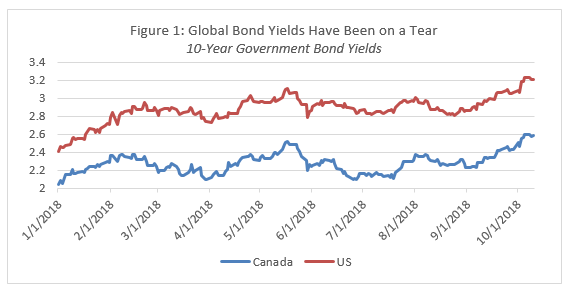 Importantly, we are also reaching an inflexion point in global monetary policy. For the first time since the Global Financial Crisis, central bank balance sheets have stopped growing, at least as a % of GDP (Figure 2). The ECB is on track to stop asset purchases by year end, and the BoJ loosened their grip on their 10-year yield target last summer, buying less bonds in the process. Overall, central banks are buying less bonds at a time when supply is increasing from government deficits, putting upward pressure on global bond yields. 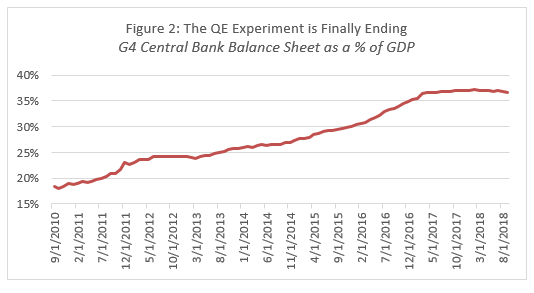 These factors have not gone unnoticed by global investors, who are now collectively short the largest amount ever of US 10-Year Treasury Futures (Figure 3). While we have been on the same side of this trade for about a year, the extreme level of investor positioning, coupled with some macroeconomic headwinds on the horizon, are giving us pause.

On the macroeconomic front, there are several issues that concern us.

First, the US trade war with China is only beginning. It is now clear that Trump and his associates are ideologically determined to permanently alter the two countries economic relationship. He sees China as an economic and geopolitical rival and as such refuses to continue to accommodate their rise (as previous administrations have done). We believe that disruptive trade tensions with China will continue to intensify, negatively impacting growth in both countries. Moreover, China is an important trading partner for many countries, not only the U.S. If growth slows there, it impacts many of its trading partners (apart from the U.S., Japan, Germany, Australia and South Korea are the largest exporters to China). The net effect will be to disrupt global supply chains, lower productivity growth, increase inflation and slow overall economic growth.

Chinese Officials are understandably worried about these developments and have been taking steps to mitigate the growth impact (fiscal and monetary stimulus, currency depreciation). But after years of unabated credit growth, there is only so much China can do to kickstart its economy. For its part, the U.S. is already enjoying massive fiscal stimulus in the form of tax cuts and increased government spending. This fiscal profligacy has helped insulate the US from trouble abroad, but is expected to fade, as the tax cuts are a one-off event and the fiscal package is set to expire at the end of 2019. Given that the Democrats are expected to take back the House in the coming mid-term elections, it is hard to see Republicans extending the funding package into a presidential election year (2020).

Putting all these things together, it appears to us that global growth will likely peak in 2018. Already, 2019 global growth consensus forecasts have decelerated, with the IMF being the last one to downgrade their growth estimates for next year (Figure 4). On balance, we see risks having shifted to the downside. 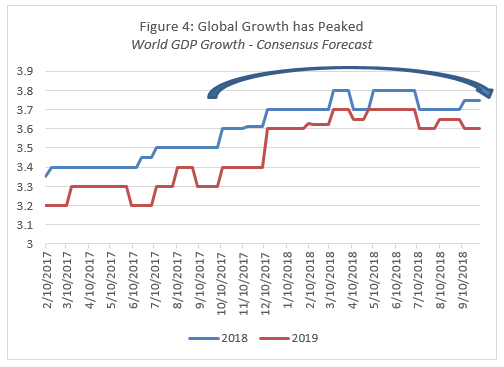 For now, Central Bankers worldwide have kept a rather optimistic tone; economic growth is still strong, labour markets are tight and inflation, while rising is still within their target ranges, so they are happy to keep tightening at the current pace. In Canada, now that NAFTA (or USMCA) uncertainty is behind us, we expect the BoC to raise rates again in October. While trade was always a downside risk, the BoC had clearly articulated that its projections did not include a repeal of NAFTA, so we expect their cautiously optimistic tone to stay unchanged, with domestic themes (household credit) remaining front and center.

In the US, the market has been catching up to the Fed, where both Powell and several high-ranking officials have argued with increasing confidence in recent weeks that the Fed Funds Rate will need to go above neutral. This signals that they are serious about those three additional rate hikes in 2019, which would take the Funds Rate above 3% by the end of 2019. According to most models, the neutral rate of interest in the US lies between 2.5-3.5%, meaning that the stance of monetary policy could become mildly restrictive next year. As discussed above, even a mildly restrictive Fed coupled with a fiscal cliff and slowing global growth could be enough to slow US growth meaningfully in 2020.

Risks to the outlook

We see oil prices as an important tail risk for the global economy. The decision by the Trump administration to pull out of the Iran Nuclear Deal and cut off Iranian oil from world markets at a time when global oil excess supply and inventories are low generates a potentially very dangerous situation. By creating an unnecessarily tight oil market, Trump’s decision exposes the world economy to a negative oil shock (i.e. a large increase in oil prices, either in response to a geopolitical event in the Middle-East or another source of supply disruption). Going forward, sustainably higher oil prices might result in higher inflation, less disposable income and slower growth down the line.

Populism is another source of risk in and of itself, as public policies pursued by populist governments are often idiosyncratic, heterodox and result in unexpected economic outcomes. In particular, in Italy the current coalition government has decided to move forward with a fiscal agenda that will see it transgress European fiscal rules. While this has been an ongoing saga throughout the summer, we are approaching crunch time as Italy has until October 15th to submit their full detailed budget to the European Commission. Moreover, S&P and Moody’s are due to review the Italian sovereign debt ratings by the end of the month, potentially setting the stage for a downgrade. A credit rating under investment grade could potentially force the ECB to stop buying Italian bonds as part of its QE program. Italy, unlike Greece or Cyprus, is too an large economy to be bailed out.

Emerging market stress, which we covered in last month’s commentary, is set to remain topical. As Central Banks remove accommodation, global capital flows dry up and overall growth slows, the weaker EMs (i.e. those with large stocks of foreign currency denominated debt, unsustainable current account and fiscal deficits) will continue to face pressure. After Argentina’s record breaking $50bn help package earlier this summer, Pakistan last week requested a $10bn assistance package from the IMF. Overall, while we are still in the early stages, we expect to see more EM stress in the coming quarters.

In the fund, we took profits on some of our option hedges on US rates (i.e. sold our IEF put spread). Consistent with our view on rates, we initiated a small position in the iShares US Investment Grade ETF (LQD) at an all-in-yield of 4.5%. To protect this position against a further sell-off in duration, we sold out-of-the-money calls to finance the purchase of a put spread. This option “wrapper” in effect allows us to collect attractive income (4.5%) with lower risk by reducing the effective duration of the position by half (from 8.5 to 4.25 years).

Given the higher level of short term interest rates, we have been purposefully keeping cash low, preferring instead to purchase short term investment grade bonds with yields in the high 2% to low 3% range. But, as discussed earlier, we are starting to think that risks in longer term rates might be more balanced as we approach peak global growth for this cycle. As such, we continue to manage the portfolios in a defensive fashion, keeping duration low (with a bias for slightly higher duration in coming months), continuously high grading credit quality.

We are acting from a position of strength and stand ready to take advantage of future dislocations. 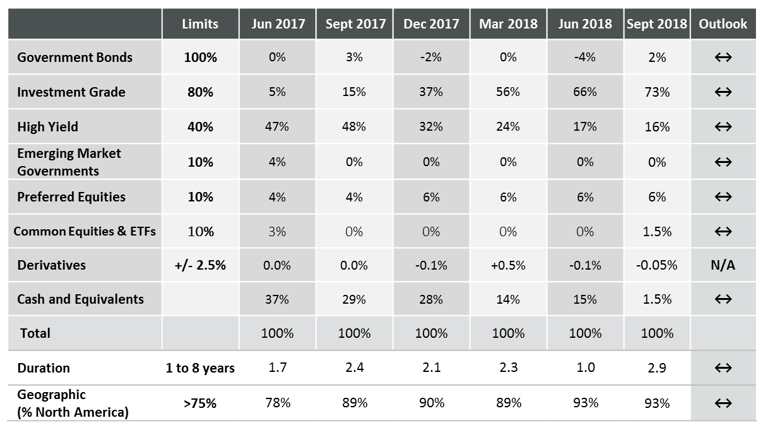