Monthly commentary discusses recent developments across both the Core and Diversified Bond Funds.

February was another strong month for risk assets, and credit was no exception. Government bond yields have finally stabilized and the yield curve even steepened a bit, consistent with our view that the combination of a Fed pause, trade tension détente and Chinese stimulus should stave off a further deceleration of the global economy. Accordingly, our U.S. recession indicator has stabilized and even pulled back a few points to 28% (Figure 1). While we are still awaiting concrete evidence (i.e. hard data) that growth has bottomed, we are optimistic that 2019 should be a year of moderate but still positive growth.

Lending further credence to our curve steepening bias (through higher long-term yields), OPEC+ seems intent on delivering on its production cuts, putting upward pressure on oil prices and by extension inflation expectations (Figure 2). Moreover, the Federal Reserve has initiated a review of its inflation targeting framework. Without delving into details, the Fed is looking at ways to make its 2% inflation target more credible by allowing inflation to overshoot in good times as much as it undershoots in bad times. All else equal, if they move forward with this change, it should result in higher inflation expectations, a higher term premium and a steeper yield curve.

While duration has performed well year-to-date, we believe it is overdone and, consistent with our base case we are better off keeping duration low until the curve steepens.

In credit, concurrent with the appreciation in equities, the first two months of the year have seen a rapid retracement of the spread widening seen last year. Due to solid fund flows and low supply, the tightening has been particularly rapid in high yield (HY), where spreads have rallied over 120bps in a very short time frame (Figure 3). Meanwhile, investment grade (IG) spreads have only rallied 20bps, underperforming their historical relationship to HY spreads. We therefore continue to see better value in IG. The new issue market has returned, albeit at a slower pace than last year. For now, demand is solid, and deals perform well, suggesting that credit should remain well bid.

In the Core Bond Fund, we have increased our government bond allocation to 7% by buying some German 10-year bonds. While the headline yield may seem small (10-15bps depending on the day), the all-in-yield once we hedge the currency exposure is closer to 2.5-2.6%, much more attractive than what we can earn in Canada (1.9%) or in the U.S. (2.7% headline, 1.9% after currency hedging). We also believe that they offer better “hedge” value in a negative economic environment; the Eurozone has been the weaker economy and depends in large part on exports for growth, hence it is more affected by the global trade. Furthermore, Italy is in technical recession, Brexit looms, German economic growth is weak and the ECB has turned dovish. If China ends up buying more U.S. goods as part of a trade deal with Trump, it will partly be at the expense of export powerhouses such as Germany. All things considered, we like German Bunds and we will look to add high grade core Eurozone government bonds to the portfolio.

In the Diversified Bond Fund, we continue to sell down our preferred share portfolio. At month end, our weight was now 1.8%, of which 1.1% is a position in an issue that has been called and will be retired as of March 20th. By the end of the first quarter, we expect to be essentially out of the asset class. In IG, we are still adding to maturities where we see good opportunities and attractive yield. In terms of positioning, there has been no change to our stance: we like low duration, higher yielding IG and believe yield curve steepening will provide us with a better entry point to add some government exposure, when we see recession risk increasing. 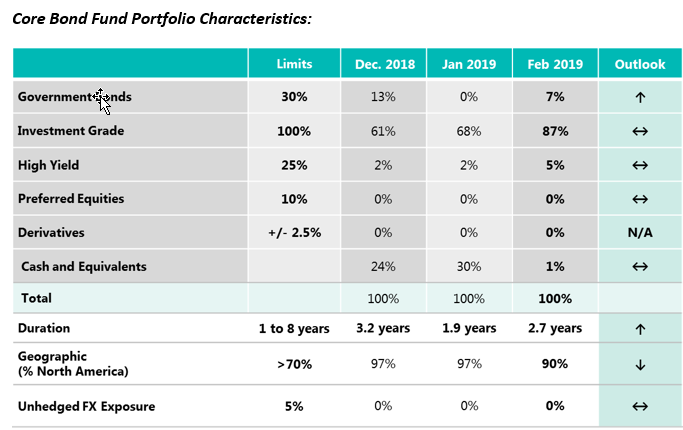 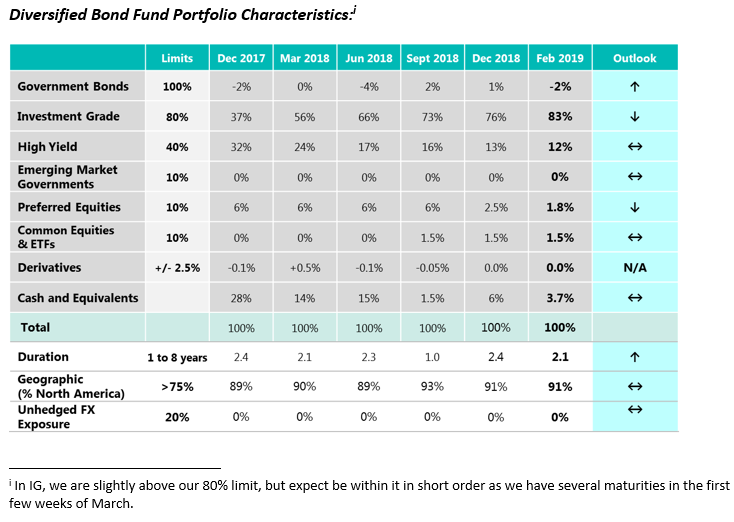