What’s going on in the government bond market

Economic data in Europe, Canada and the US have disappointed to the downside, global PMI’s have been trending down, inflation is non-existent and an overly dovish Federal Reserve statement last week has made market participants wonder if there is something the Fed knows that everyone else doesn’t. This past weekend, we finally saw some green shoots with a positive surprise in the March China’s PMI. This was a very important datapoint in either negating or confirming the current slow-growth narrative.

Globally, interest rates have declined materially and abruptly, like nothing we’ve seen in years. 10 year bonds in Canada and the US yield 1.66% and 2.48% respectively and Germany 10 year Bunds now yield -0.05%. In futures, the market is now pricing in a 50% chance of a rate cut this year by both the Fed or the Bank of Canada. So as you can see, interest rates are currently suggesting a very pessimistic outlook on growth. The slope of the yield curve ( the difference between 10 year and 3 month interest rates) has now gone negative, implying a recession at some point in the future. Our US yield curve model now implies a 40% chance of recession 12 months from now. 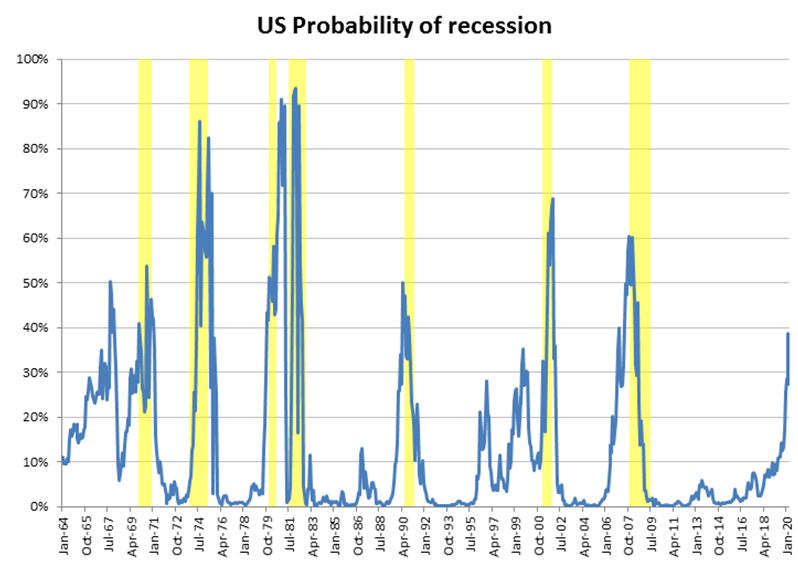 What continues to perplex us, is the fact that equities and credit are behaving very well, yet government bonds are suggesting a more dire environment, potentially recession. From our perspective, we accept that globally economies are slowing, but consistent with our models and relevant economic data we do not see a recession in 2019. This environment feels very similar to early 2016 when the market expected a global recession, but central banks responded with aggressive economic stimulation, the data turned (late summer), yields moved higher and credit and equities performed extremely well.

We’re not in the recession camp, yet. With major central banks moving back to accommodative monetary policy, economic growth this year should be slow and steady, similar to 2016. While we accept the current slow growth environment is supportive of lower interest rates, we feel that growth in the latter half of 2019 may in fact surprise, as lower rates provide a boost to the economy. We also wouldn’t rule out the return of more unconventional monetary policy. The chart below provides the path of TLT, the long duration ETF during 2016. It illustrates the big move lower in interest rates during 2016 and the reversal, as economic growth improved, ending the year basically unchanged.

How are we positioned
So how are we positioning our funds? With the expectation that global growth will be slower in 2019, but not zero, we feel it’s prudent to add government bonds to our portfolio. As our view is that the European economy will be the most vulnerable in a global slow down, we’ve added a 5% weight in core European sovereign bonds (primarily France, Germany). French 10y bonds actually yield 2.7% (35bps + 2.35% hedging benefit). We have also added long term (30y) US government bonds which will perform well in a declining long-term rate environment and they yield of 2.88% a full 1% over equivalent Canadian bonds. By the end of the month, the diversified bond fund will probably have a 10% to 15% weight in government bonds with duration increasing to about 4 years.

In credit we took advantage of the recent rally in interest rates and in credit to sell longer dated corporate bonds and replace these positions with shorter dated securities. We own almost no preferred shares, our position is close to zero, 0.75%. Our high yield exposure continues to be very low, as we feel these securities are very expensive and don’t represent attractive risk-reward characteristics in the current slow growth environment. To be clear, we still prefer credit and the higher income we receive, relative to governments, but we prefer to express that bias by owning shorter dated securities that will provide more liquidity and less volatility.

Fund return expectations
A few words on performance and return expectations for 2019. Obviously, the massive rally in duration, so far this year, has benefitted the benchmark and higher duration bond funds. As our fixed income strategies focus on short-term credit and not duration to generate income, that’s our differentiator, we’ll always underperform when interest rates move down aggressively. After 3 months the diversified bond fund is up approximately 2% and the fund has a yield of over 3.5%. This should translate in a good performance this year if things stabilize. Obviously, if interest rates decline further and credit spreads compress the fund will do better.

In closing, we feel reasonably confident that 2019 should be a good year for bonds and our fixed income funds, but it won’t be without somewhat some ups and downs. We are currently well positioned to endure in a slow growth environment. If global economic growth improves or disappoints and volatility accelerates, we have ample liquidity to respond and reposition the fund.