As we discussed in our previous monthly update, the rally has been driven by multiple expansion as forward earnings estimates only now look to be bottoming. In fact, Q1 earnings will likely come in flat to slightly down on a year over year basis, before growth reaccelerates through the balance of 2019. The market, acting as a forward discounting mechanism, has rallied as global recession fears faded, sentiment improved, and a few key economic indicators showed early signs of reacceleration.

Although the US-China trade war has clearly had an impact on economic activity in the first quarter of 2019, China has been aggressively stimulating its economy, which seems to be having the desired effect. After three months of contraction, the Caixin China Manufacturing PMI rose to 50.8 in March, from 49.9 the previous month, beating expectations of 50.1. Corroborating the return to economic expansion, the Official NBS Manufacturing PMI in China rose to 50.5 in March from a three-year low of 49.2 in February, beating expectations of 49.5. In the United States, the ISM Manufacturing PMI also improved in March to 55.3 from 54.2 in February, versus expectations of 54.5. Trade negotiations appear to be going well and most commentators are expecting some form of a deal to be completed by the end of April.

Adding further support to the rally, the US Federal Reserve completely and officially pivoted from hawkish to dovish (almost unbelievably over the span of just a few months) at its FOMC meeting on March 20. In addition to leaving the benchmark funds rate unchanged in a range of 2.25% to 2.50%, they indicated that no additional rate hikes would be coming in 2019 and the balance sheet roll-off program (quantitative tightening) would be completed by the end of September. Interestingly, the market has extrapolated this dovishness and has priced slightly more than a 50% chance of an interest rate cut by the end of 2019, but we believe that these odds overstate the likelihood of lower rates in 2019.

As bond prices quickly adjusted to the messaging from the FED, a forward-looking recession indicator was triggered with the inversion of the 3-month to 10-year yield curve (although the more widely-watched 2-year to 10-year yield curve remained positive). Thankfully, the 3-month to 10-year yield curve quickly steepened and will likely prove to be a false signal in terms of predicting a recession within the next 12 to 18 months. We will be diligently watching consumer confidence and jobless claims for any signs of an impending economic downturn, but for now low interest rates will serve to boost economic activity and support continued earnings multiple expansion.

Top contributors to the year-to-date performance of the Ninepoint Focused US Dividend Class by sector included Information Technology (+325 bps), Industrials (+284 bps) and Health Care (+140 bps) while top detractors were limited to Financials (-31 bps) and Energy (-6 bps). 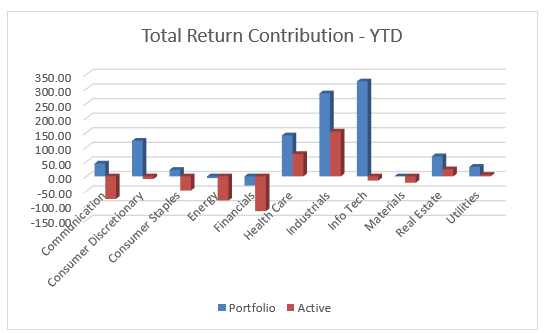 We are overweight the Health Care and Consumer Discretionary sectors, while underweight the Financials and Materials sectors. We believe that one of the most important investment decisions that will have to be made in 2019 will be whether to pivot to “value” from “growth”. A weakening USD, a rising WTI crude oil price, a rising 10-year US bond yield and a steepening yield curve will likely be required before value outperforms growth for any sustainable length of time. However, if we do see all those conditions met in 2019, we expect to boost our exposure to the Financials and Energy sectors. If not, we expect to maintain our quality/defensive positioning. 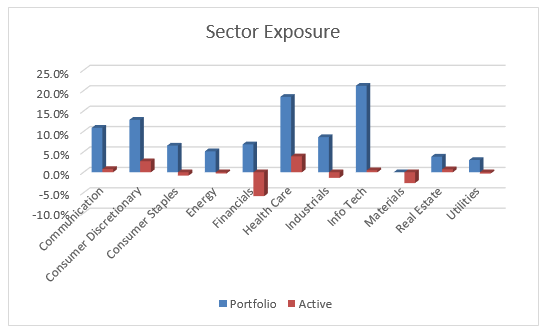 Tragically, Boeing has made headlines after two crashes involving its 737 MAX aircraft flown by Lion Air of Indonesia and Ethiopian Airlines of Ethiopia less than six months apart. The terrible loss of life should not be trivialized and questions regarding the certification process, system documentation and pilot training raise valid concerns. However, we should remember that commercial air travel is statistically the safest form of transportation available. The industry is highly regulated, scrutinized and monitored to ensure that these types of events happen as rarely as humanly possible.

Unfortunately, Boeing had been our second largest position for most of this year (just behind Microsoft) and had generated a year-to-date return of more than 35% by the end of April. Investors were happily watching improving US-China trade relations and eagerly awaiting a flood of cash flow as R&D spending decelerates and deliveries ramp up over the next few years. But after such a monster rally, with the shares trading at approximately 20x forward earnings (well above the stock’s long-term average valuation) and much of the good news in the price, we believed that it was prudent to trim our exposure.

The timing was purely coincidental, but we fortuitously reduced our position almost by half just before the second 737 MAX crash, which allowed our unitholders to avoid giving back much of our financial gains. Because we were already committed to reducing our holdings, it was an easy decision to immediately sell the balance of our position when the flight plan data appeared to indicate similarities between the two incidents. Boeing, both as a Company and as a stock, will be fine longer-term but we don’t feel the need to be involved today as the Company works to resolve its current issues.

The Ninepoint Focused US Dividend Class was concentrated in 26 positions as at March 31, 2019 with the top 10 holdings accounting for approximately 47.5% of the fund. Over the prior fiscal year, 22 out of our 26 holdings have announced a dividend increase, with an average hike of 7.8%. We will continue to apply a disciplined investment process, balancing various quality and valuation metrics, in an effort to generate solid risk-adjusted returns.