Top contributors to the year-to-date performance of the Ninepoint Focused US Dividend Class by sector included Information Technology (+553 bps), Industrials (+301 bps) and Consumer Discretionary (+214 bps) while top detractors were limited to Energy (-11 bps). 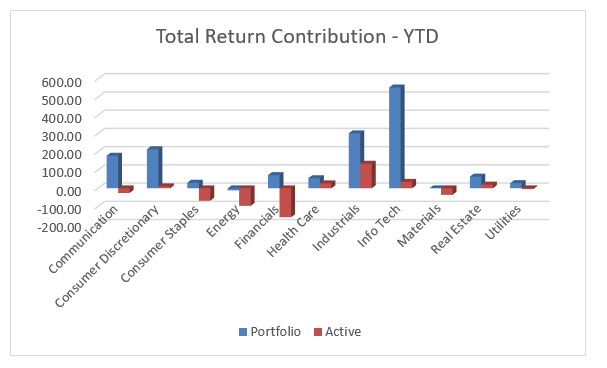 We are overweight the Information Technology, Financials, Communications and Consumer Discretionary sectors, while underweighted in the Health Care, Materials, Industrial and Utilities sectors. We believe that one of the most important investment decisions that will have to be made in 2019 will be whether to pivot to “value” from “growth”. A weakening USD, a rising WTI crude oil price, a rising 10-year US bond yield and a steepening yield curve will likely be required before value outperforms growth for any sustainable length of time. However, if we do see all those conditions met in 2019, we expect to boost our exposure to the Energy, Industrials and Materials sectors. If not, we expect to maintain our current positioning. 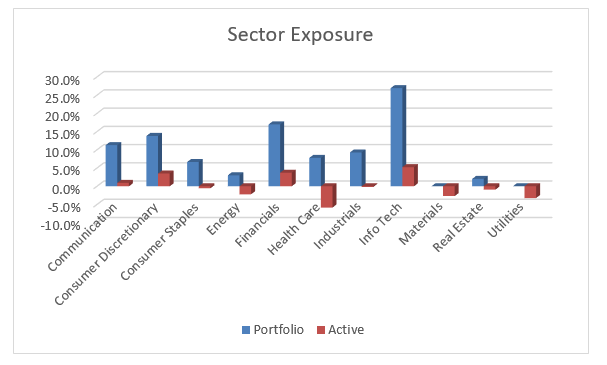 In April, our top performing investments included Walt Disney (+73 bps), Microsoft (+72 bps) and Mastercard (+47 bps) while Anthem (-56 bps), Boston Scientific (-20 bps) and Raytheon (-11 bps) underperformed.
The Walt Disney Company, our top contributor in April, rebounded dramatically after an impressive investor day on April 11, 2019. Leading up to the meeting, shares of Disney had basically flat-lined as investors waited to hear more details of management’s strategic vision. Thankfully, the investor day exceeded expectations on almost all measures and acted as a clear catalyst, with the shares up 11.5% the next day.

This year’s investor day was eagerly anticipated since it was well-known that Disney would finally disclose greater information regarding its direct-to-consumer offering, called “Disney+”. Details did not disappoint, with management targeting a November 12th launch date in the US market at a price point of $6.99 per month (approximately half the price of a comparable Netflix monthly subscription). They also revealed that the service will offer new original programming in addition to the Company’s deep catalogue of movies and TV shows from Disney, Pixar, Star Wars, Marvel Studios and National Geographic, as well as The Simpsons and other 20th Century Fox Titles.

Disney even provided specific guidance of between 60 to 90 million subscribers by fiscal 2024 (1/3 domestic and 2/3 international) and forecasted profitability within a five-year time frame. For comparison purposes, Netflix has approximately 150 million streaming paid memberships today and a current market cap of $166 billion. If we value Disney based on a sum-of-the-parts analysis, incorporating Disney’s core earnings (including the Media Networks segment, the Parks, Experiences & Consumer Products segment and the Studio Entertainment segment) and the direct-to-consumer offering (including Disney+, ESPN+ and Hulu), we can arrive at a valuation significantly above Disney’s current total market cap of $243 billion. Building a successful direct-to-consumer service will admittedly take significant amounts of time and capital (and will likely not be a linear journey) but the value-creation opportunity is undeniable.

The Ninepoint Focused US Dividend Class was concentrated in 27 positions as at April 30, 2019 with the top 10 holdings accounting for approximately 44.7% of the fund. Over the prior fiscal year, 22 out of our 27 holdings have announced a dividend increase, with an average hike of 11.0%. We will continue to apply a disciplined investment process, balancing various quality and valuation metrics, in an effort to generate solid risk-adjusted returns.