Top contributors to the year-to-date performance of the Ninepoint Global Infrastructure Fund by sector included Industrials (+474 bps), Utilities (+362 bps) and Real Estate (+256 bps) while no sector had a negative contribution on an absolute basis. 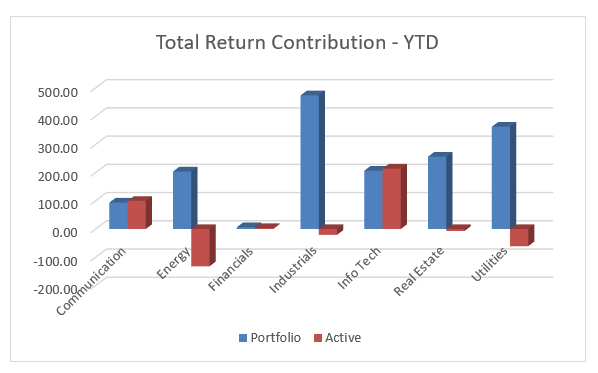 Note that we are underweight the Energy, Industrials and Utilities sectors and have allocated capital to the Communication, Financial and Information Technology sectors in line with our “total-infrastructure” approach. We are essentially market weight the Real Estate Sector, which is dominated by cell tower REITs. 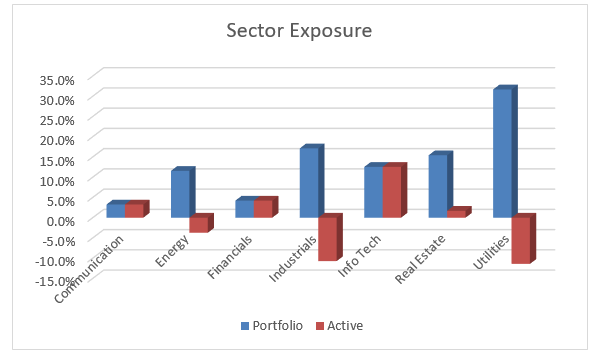 In April, our top performing investments included Microsoft (+35 bps), Comcast (+31 bps) and CP Railway (+30 bps). Top detractors in March included Waste Management (-11 bps), Raytheon (-11 bps) and ENEL (-11 bps).
Comcast, a significant holding in the portfolio, continued to recover from depressed valuation levels at the beginning of 2019 and rallied nicely in April. Essentially, concerns that management would overpay for 21st Century Fox in a bidding war with Disney in late 2018 proved to be unfounded. Instead, Disney acquired Fox and subsequently sold the combined Company’s stake in Sky (the British broadcaster with 23.7 million customer relationships) to Comcast, which provided investors with an excellent buying opportunity. Management’s confidence in the deal was made clear on January 23, 2019 with the announcement of a 10% dividend increase (to $0.84 per share on an annualized basis) and the accelerated reduction of the indebtedness incurred to complete the asset purchase.

First quarter results, released on April 25, 2019, demonstrated the strength of the combined business model, with revenue increasing 17.9%, adjusted EBITDA increasing 18.1%, net income attributable to Comcast increasing 14.0% and adjusted earnings increasing 16.9% to $0.76 per share. But beyond the financial metrics, the strength of Comcast’s service offering relative to its peers can be seen from management’s ability to continue to protect its subscriber base in an era of cord-cutting.

The Ninepoint Global Infrastructure Fund was concentrated in 31 positions as at April 30, 2019 with the top 10 holdings accounting for approximately 34.6% of the fund. Over the prior fiscal year, 27 out of our 31 holdings have announced a dividend increase, with an average hike of 14.8%. Using a total infrastructure approach, we will continue to apply a disciplined investment process, balancing valuation, growth and yield in an effort to generate solid risk-adjusted returns.

Ninepoint Partners LP is the investment manager to the Ninepoint Funds (collectively, the “Funds”). Commissions, trailing commissions, management fees, performance fees (if any), other charges and expenses all may be associated with mutual fund investments. Please read the prospectus carefully before investing. The indicated rate of return for series F units of the Fund for the period ended April 30, 2019 is based on the historical annual compounded total return including changes in unit value and reinvestment of all distributions and does not take into account sales, redemption, distribution or optional charges or income taxes payable by any unitholder that would have reduced returns.  Mutual funds are not guaranteed, their values change frequently and past performance may not be repeated. The information contained herein does not constitute an offer or solicitation by anyone in the United States or in any other jurisdiction in which such an offer or solicitation is not authorized or to any person to whom it is unlawful to make such an offer or solicitation. Prospective investors who are not resident in Canada should contact their financial advisor to determine whether securities of the Fund may be lawfully sold in their jurisdiction.