After stabilizing in April, economic data took a turn for the worse in May. Weakness was broad, with disappointing PMIs in the U.S, Europe and China. Non-farm payrolls were also very weak in the U.S., with a gain of only 75 thousand jobs, well short of consensus expectations for a 170 thousand gain. Real time indicators of US Q2 GDP now track at about 1.3%, well below the 3.1% realized in Q1. Overall, the green shoots that were visible early this spring have all but disappeared (Figure 1). 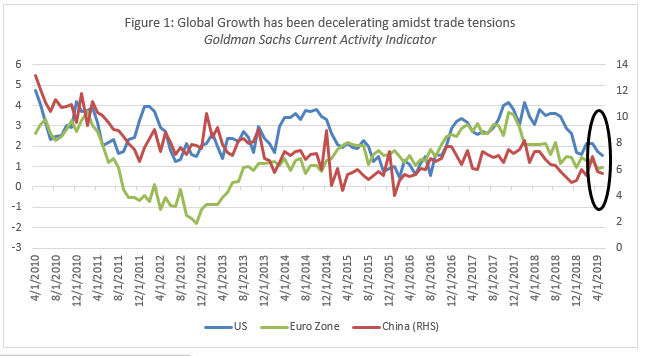 Against this negative economic backdrop, trade rethoric has meaningfully stepped up. The tone between China and the U.S. has become acrimonious, with both sides blaming the other for reneging on previously agreed upon provisions. To make matters worse, the U.S. has also imposed trade restrictions on the Chinese telecom giant Huawei, effectively barring the company from purchasing critical technology from American companies. Talks have now broken down and it has become clear to us that US/China trade tensions are here to stay. The dispute is not solely about the trade deficit, it is about maintaining the US hegemony vis-à-vis China. The tone on both sides has gone from bad to worse and we do not think that this will be solved any time soon. As such, we do not expect much from the G20 meeting at the end of June and assume the imposition of further tariffs on Chinese imports.

To add fuel to the fire, Trump opened a new dimension to the trade war by threatening tariffs on Mexico as leverage to solve immigration issues. While the tariffs did not go into effect after last minute negotiations, this is a particularly important development as it relates to future trade deals. The Mexican parliament was in the process of ratifying the new free trade agreement with the U.S. and Canada when this threat was made. That signals to us, and to the rest of the world, that any agreement with Trump and his administration can be rescinded at any time, for any unrelated reason. This realization by political and business leaders makes it increasingly unlikely that anyone would want to make long term decisions (trade agreements by governments, investment decisions by firms and market participants, etc.) in such an uncertain climate.

As such, we believe that business confidence has been permanently eroded by these developments and that it is unlikely we see a sustained rebound in the world economy. The bond market seems to agree; the yield curve has further inverted in Canada and the U.S., reaching levels not seen since 2006. Our recession prediction model now signals a 46% chance of recession 12 months from now (Figure 2). Of note, the entire yield curve in Canada now trades below the overnight rate.

Figure 2: Probability of Recession is going up 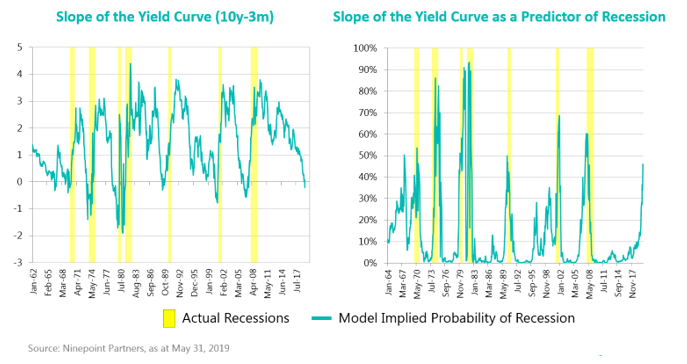 Central bankers have taken notice; both the Federal Reserve and the ECB have acknowledged the increase in uncertainty and the associated downside risks to the economy. The question is no longer if, but when they will introduce additional easing. The market is now pricing two rate cuts by the Fed this year and more in 2020. In the Euro Zone, Mario Draghi has signaled that all tools were at their disposal (rate cuts, QE, forward guidance) to introduce additional easing. Given the transition to a new (and potentially hawkish) ECB President in the fall, we would not be surprised to see Draghi act forcefully this summer to force his successor’s hand in a more dovish direction.

Credit continues to perform surprisingly well; in Canadian Investment Grade (IG), spreads were about flat. Spreads are now back to the top end of their old trading range of 110-120bps.

In High Yield (HY), spreads widened almost 90bps with the decline in equity markets. However, they have since then recouped most of their losses.

Given the downside risks to the macroeconomic environment and the signals from the bond market, we find it odd that credit and equities have behaved so well; there seems to be some cognitive dissonance in the bullish narrative. For now, equities seem to believe that the Fed will come to the rescue by cutting rates, and that this will be enough to extend the cycle. Accordingly, bad economic data has been received with higher equity prices (i.e. bad is good environment). At the time of writing, the S&P 500 is within striking distance of new all-time highs and with bond yields as low as they are (U.S. 10 year bond at a multi-year low of 2.1%), financial conditions are very accommodative. In this context, barring real economic downside risk, it is hard to see the Fed cutting rates. But this market is already assuming that the Fed will cut rates, so it will likely be disappointed if it doesn’t.

On the flip side, if the Fed does cut rates, it is because things are taking a turn for the worse. We would then expect earnings estimates to move lower and economic data to continue to disappoint. In this state of the world, it is hard to see equities and credit perform well, let alone stay at all time highs.

There is very little the Fed (or other central banks) can do to offset a negative shock to confidence induced by reckless trade policies emanating from the White House.

May was a good month for the DBF, returning 86bps as interest rate declines far outweighed minor credit spread widening. We continue to increase duration and our government bond allocation, consistent with our investment framework and macroeconomic views. We are adding to our 30-year U.S. government positions on pullbacks, seeing those as the best bang-for-our-buck in a risk-off/recession environment. Since month end, we have further increased our duration to 4.4 years.

Our investment grade position, while still a substantial 64% of the portfolio, is very conservative, with a duration of 2.7 years and yield to maturity of 3%, of which a third matures within a year. We are active in the new issue market, when pricing is adequate, but at this juncture we are increasingly selective, keeping credit risk low, duration low and liquidity high. 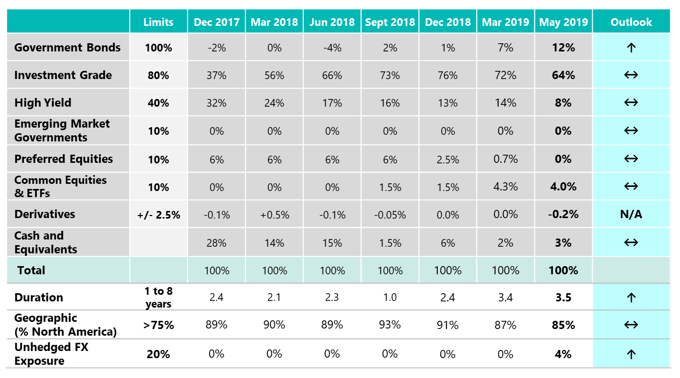 May was another solid month for the Credit Opps, with a net return of 72bps on Series A. Returns were driven by three major factors. First, as discussed previously, Canadian investment grade credit continues to perform well. Second, the fund had a 6% position in U.S. 30-year government bonds through the TLT ETF (along with an option overlay), which benefited from the strong rally in duration. Finally, our very small and relatively defensive HY positions were unimpacted by the mid-month volatility in equity markets, but our HY hedges (through HYG options) generated gains. With the quick reversal in risk assets mentioned above, some of the hedging gains have now been reversed. For now, we intend to keep this position as we expect more volatility around the G20 meeting in Japan at the end of June. 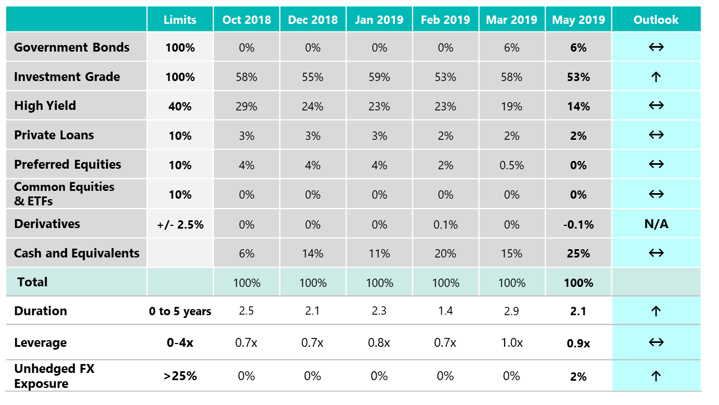 With the deterioration in global economic data and the worsening of trade tensions, we expect markets to become more volatile, both on the upside and the downside. After a strong start to the year, we aim to be prudent and keep the portfolios liquid, so that we can act from a position of strength.