It was another difficult week for equity markets, affected by trade wars and worries about the collapsein bond yields and an inversion that is often an indicator of an upcoming recession. We prefer to get away from the noise of daily news and focus on on-the-ground fundamental research.

In the last two weeks, many of us at Global Alpha attended conferences, covering Asia, North America as well as Japan. We had the opportunity to spend ten days in Japan, attending the 15th CLSA Japan Forum. We also visited some of our holding companies and travelled to different secondary cities. We were not that far from the news as the US President visited Tokyo while we were in the country.

Japan is a free market economy that is the fourth largest in the world. It excels in many sectors such as electronics, robotics, automobile and health care. Japan’s economy is known for its efficiency and competitiveness in export-oriented sectors, but productivity is lower in areas such as agriculture, distribution and services. The outlook for Japan’s economy is for slow growth and a slow pace of reform. However, political stability is at its highest level since the 1950s, which is a positive. We often hear about all the challenges facing Japan. We will discuss a few later in this commentary.

Investors tend to correlate GDP growth with the performance in stock prices, but research has shown there is actually a low correlation between the two. The recent performance of China’s stock market is an example, and we may forget that from 1960-68, Japan’s GDP rose 179% while its stock market declined 4%.

So, what could drive the Japanese stock market to go up and even outperform other countries? A few key ingredients, starting with very cheap valuations.

The second ingredient is profit growth and higher ROE. Since Prime Minister Abe came back into power in 2012, profitability has doubled and ROE has improved from about 4% to 8%.

What may be not so well-known is that Japanese companies only make about one-third of their profits from Japan. Also, from 1993 to 2018, Japanese companies’ earnings outperformed US companies’ profits, although they have been more volatile (cyclical). What has happened in the two markets since 2018 is an important multiple adjustment: contraction for Japan, expansion for the US.

The third ingredient is activism. All the large US corporate activist firms and private equity firms now have a presence in Japan. Buybacks are exploding. We have seen the positive impact on companies, for example Sony, which has doubled in size since 2016 following Daniel Loeb’s Third Point involvement.

In Japan, dividends rose 9% year-on-year in the last year, although the payout ratio is still low at around 38%. Significant value could be unlocked. We also mentioned the strength of balance sheets. Currently, over US$2 trillion in cash and liquid securities are on the balance sheet of Japanese
companies excluding the banks.

A few prescriptions to unlock value:

The fourth ingredient might come from more market participation. Contrary to the US, Japanese pension funds still maintain an asset mix with bonds at more than 65%. Individuals in Japan do not participate in the stock market; only 9% have an investment account. This is despite having one of the highest savings rates in the world and where cash assets exceed US$150,000 per household. Foreign funds are underweight Japan.

We believe these four ingredients are a recipe for strong performance of the Japanese stock market going forward.

Now a few other items of interest.

The trade war waged by President Trump is going global. Besides China, we learned today that Mexicowill also face tariffs. And we are not talking about tariffs like those previously imposed on Canadian or British steel or the threat of tariffs on EU cars. So what is the risk that the US will impose tariffs on Japan? Although nothing would surprise us, we believe the risk is fairly low. Japan’s trade deficit with the US is quite small. Except on agricultural products, Japan generally has low tariffs. There are no tariffs in Japan on automobiles and machinery from the US.

The big problem is agriculture, as President Trump has clearly stated. We believe that Japan will agree to increase its imports—it has no choice. Japan only produces 38% of the food it needs, and its farmers are aging. Therefore, Japan will increase imports.

Another subject of interest is the increase in the sales tax (value added tax), scheduled to rise from 8% to 10% this fall. We believe it is unlikely that this tax will be implemented this year.

One statistic closely watched by market analysts is Japanese wage increases and the inability to increase above 2% per annum. Like many statistics impacting CPI, this one is wrong. In Japan, salaries are actually increasing by over 2%, except the base salary is only increasing 0.8%. CPI does not capture yearly bonuses or seniority and promotion increases. With those included, we are closer to 2.5%.

A real positive statistics that we have discussed in prior commentaries is the increase in tourism in Japan. Eight years ago, 8 million people came to Japan on a tourist visa. The number of real tourists was probably about 2 million if you exclude business visitors. So far this year, there have been 35
million inbound tourists, which makes Japan as the eleventh most visited country in the world and number 8 in terms of revenues, up from number 26 eight years ago.

In 2020, 40 million visitors are expected. This number is probably boosted by the Olympics, but anyone who has visited Japan will agree that the country is attractive and that it has immense potential as a tourist destination.

As far as language is concerned. All trains, the metro and public places have signs and audible instructions in English. More and more Japanese people, especially in the hospitality industry, speak English.

Finally, we met with a few of our holdings and had a chance to visit stores of others.

Milbon is a holding in our International Small Cap portfolio. It is a leader in hair colouring and care products sold by hair salons. What did we learn?

Milbon believes it can double its market share in Japan to 30%+ from its current 16%. It has already reached 35% in Osaka. Its goal for China is to grow at 15% CAGR for at least the next 10 years. That means the company thinks it can quadruple its business in China in that period. In Korea, its market share is 5%, and it believes it can grow to 20%. Although currently very small, Milbon believes that in the long term the US could be its biggest market.

We also met Lasertec, a semi-conductor equipment manufacturer. The company’s stock price is down significantly in the last six months, like most of its peers. However, we believe that Lasertec is solidly positioned. It has 50% market share in the inspection and measurement market with only one
competitor, KLA Tenkor. It is a niche, very focused company with expertise in optics. It works with all the major semiconductor firms from Intel to TSMC to Samsung. Lasertec has 100% market share in semiconductor mask blank inspection systems and 100% market share in EUV mask backside
inspection and cleaning systems, a new technology that will be adopted in the next 5 to 7 years as semiconductor firms are moving to 5 nanometer node (Nm). Eighty-three percent of Lasertec’s sales are outside of Japan and 60% of its employees are engineers.

We also met with a few other of our portfolio companies—we have pictures of Seria’s and Ain Holdings’ stores if you are interested.

Finally, we attended a real estate panel on Tokyo real estate that we found particularly interesting. Investors often correlate real estate with demographics. Certainly, for countries like China and Japan it is particularly worrying as their populations are aging quickly and they will likely see population decreases unless immigration picks up. But Japan is not Tokyo. Tokyo’s population has been growing since 2000 and should continue to grow until at least 2030.

In Japan, demand for real estate is growing, despite the population decrease. Why? The reason is smaller households. Also, although GDP growth in Japan is low, GDP per capita is growing.

Coming back to Tokyo. It is a wealthy place, and tourism is booming. As mentioned earlier, 35 million tourists have visited Japan so far this year. It is the number one destination for people from Thailand, and over 12 million tourists from China will visit this year. A growing Asian middle class will increase tourism. Asian tourists like Japan, and the rest of the world is also discovering the country.

In 2018, 2.5 million foreign workers lived in Japan, an increase from 2 million in 2015. Recent visa reform will increase that number to 3 million next year. Foreign direct investment continues. Japan is the Switzerland of Asia!

Tokyo is a great place to live. It was ranked as one of the top ten most livable cities in the world in 2018. Foreign buyers are starting to purchase residential real estate in Tokyo and other cities. There are no restrictions on foreign buyers.

The Japanese real estate market is expensive. Rents are going up and occupancy is low. One problem is that cap rates have compressed, everything is expensive. Also cap rates have converged, so whether you are looking at office, hotel, industrial or residential properties, cap rates are very similar. So the best and less risky opportunity here is to buy less cyclical, residential property in central Tokyo. This is exactly what we own with Advance Residence, a Japanese REIT with 263 properties and over 21,000 apartments. 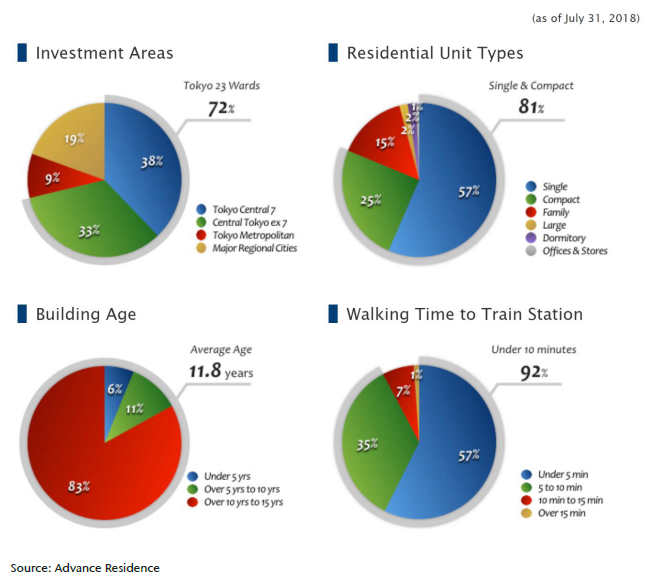 Have a good weekend.

1 All returns and fund details are a) based on Series F units; b) net of fees; c) annualized if period is greater than one year; d) as at April 30, 2019; e) annual returns are from 03/15/2018. The index is 100% MSCI EAFE Small Cap NR USD (CAD) and is computed by Ninepoint Partners LP based on publicly available index information.

Ninepoint Partners LP is the investment manager to a number of funds (collectively, the “Funds”). Commissions, trailing commissions, management fees, performance fees (if any), and other expenses all may be associated with investing in the Funds. Please read the prospectus carefully before investing. The indicated rates of return for Series F of the Funds for the period ended April 30, 2019 are based on the historical annual compounded total returns including changes in [unit/share] value and reinvestment of all distributions or dividends and do not take into account sales, redemption, distribution or optional charges or income taxes payable by any securityholder that would have reduced returns. Mutual funds are not guaranteed, their values change frequently and past performance may not be repeated. This communication does not constitute an offer to sell or solicitation to purchase securities of the Funds.

The opinions, estimates and projections (“information”) contained within this report are solely those of Ninepoint Partners LP (“Ninepoint”) and are subject to change without notice. Ninepoint makes every effort to ensure that the information has been derived from sources believed to be reliable and accurate. However, Ninepoint assumes no responsibility for any losses or damages, whether direct or indirect, which arise out of the use of this information. Ninepoint is not under any obligation to update or keep current the information contained herein. The information should not be regarded by recipients as a substitute for the exercise of their own judgment. Please contact your own personal advisor on your particular circumstances.

Views expressed regarding a particular company, security, industry or market sector should not be considered an indication of trading intent of any investment funds managed by Ninepoint Partners LP. These views are not to be considered as investment advice nor should they be considered a recommendation to buy or sell.