Notwithstanding all the important central bank meetings in July (Fed and ECB in particular), the highlight of the month was without question Trump announcing the dreaded 10% tariffs on the last $300bn of imports from China. At the time of writing, the export restriction waivers for Huawei were still nowhere to be found and China had reportedly halted all purchase of U.S. agricultural goods. Furthermore, China has allowed the Renminbi to depreciate past the psychologically important 7 level, stoking fears of currency wars. For those hoping for a stabilization of trade tensions, this is a serious setback. From our standpoint, these actions are the natural continuation of the U.S.’ strategy of containment. The incessant volte-face by the American administration has completely eroded their credibility. After everything that has happened over the past several months, it is inconceivable to us that the two sides could come together and agree on anything. Nonetheless, with Trump being Trump, we shouldn’t be surprised that sentiment around this trade war will continue to be volatile.

Across the pond, UK and Italian politics have injected another dose of uncertainty to an already feeble European economy. Boris Johnson was officially sworn in as Prime Minister, taking the British pound down over 3% in a few weeks with his hard Brexit posturing. It is now increasingly clear that he is committed to a high stakes game of chicken with the rest of the European Union, refusing to engage with them unless they rescind the Irish Border Backstop from the deal (a non-starter for them). A hard Brexit on October 31st is now increasingly more likely.

In Italy, the coalition government led by the League and the 5-Star movement is increasingly fragile, and elections in the fall seem like the most probable outcome. The League’s Mateo Salvini is leading in the polls and is expected to form the next government, possibly a coalition with a fringe far right party (as opposed to the current coalition with the far left 5-Star). This could spell trouble for the Euro Zone as a Salvini led government is set to clash with Brussels over budget constraints, raising the spectre of Italexit once again. Italian sovereign spreads are once again widening violently.

The bond market’s reaction to this cascade of headlines and developments was extreme; global bond yields declined precipitously, sending a record amount of global debt to negative yields to maturity (Figure 1). In several European countries, the entire government yield curve (tenors from 1 month to 30 years) has negative yields. Closer to home, although interest rates are not negative yet, the Canadian and U.S. yield curves are inverted (i.e. the 10-year yield is lower than the 3-month T-Bill yield) by 40bps and 30bps, respectively. According to our models, this suggests that the probability of entering recession in the near future (roughly 12 months) now sits above 50%. We do not take these signals lightly, as they are historically quite accurate, registering only one false alarm in the mid-1960s. 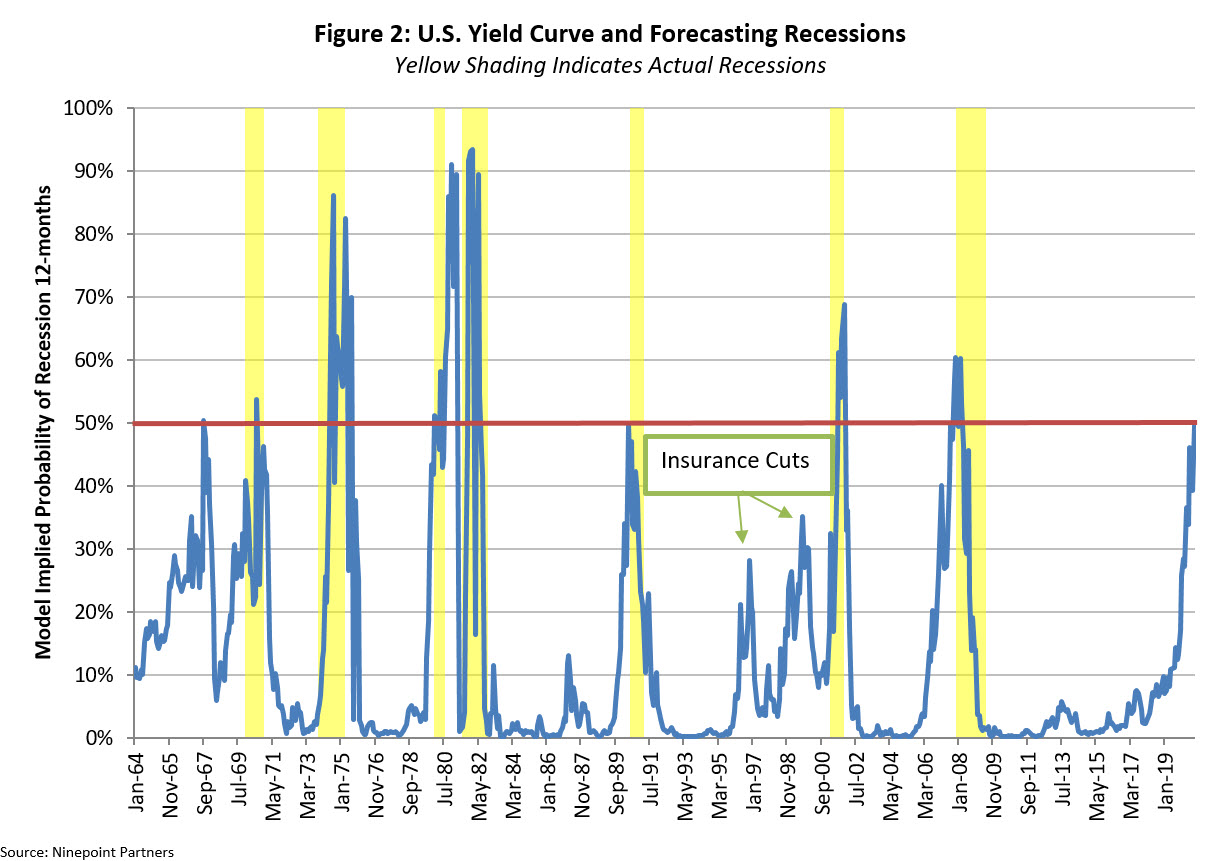 At this juncture, the bond market is telling us that we are well past this idea of “insurance cuts” by the Fed. As shown in Figure 3 below, the market is now pricing 100bps of further rate cuts by the Federal Reserve in the next 12 months (taking the total to 125bps). In the mid-1990s, mild cuts by the Fed to stabilize the economy were only 75bps. In Canada, where we would argue the BoC is behind the curve, only 55bps of cuts are priced in in the same time frame. We expect the BoC to follow the lead of global central banks and start easing soon. For the ECB, after disappointing the most dovish of expectations in July, the stage is set for them to cut rates and announce a new quantitative easing program.

Communications from central bankers at Jackson Hole in late August, along with meetings in September (BoC, ECB and Fed) will be crucial for near term market developments. While they are very unlikely to sound the recessionary alarms just yet, the tone and details of their macroeconomic forecasts for the next two years should provide some valuable insight into their probable next steps.

Credit remains resilient as the thirst for yield continues, but the equity volatility of the first few weeks of August is starting to influence spreads. A few corporate issuers have tried to take advantage of very low all-in yields, but investor appetite is not as strong as it was earlier in the year. We continue to be increasingly selective in the new issue market. From the recent lows, credit spreads are only modestly wider, not justifying us to take more risk. For now, we are maintaining our conservative positioning with higher quality, lower duration credit.

July was a good month for the DBF, returning 28bps (Series F), driven mostly by carry. We have continued to increase duration and our government bond allocation, consistent with our investment framework and macroeconomic views. In early August, we added 10-year U.S. government bonds to the portfolio, taking our duration up to 6 years. Our corporate bond portfolio remains very short dated and defensive, with a duration of only 2.9 years. 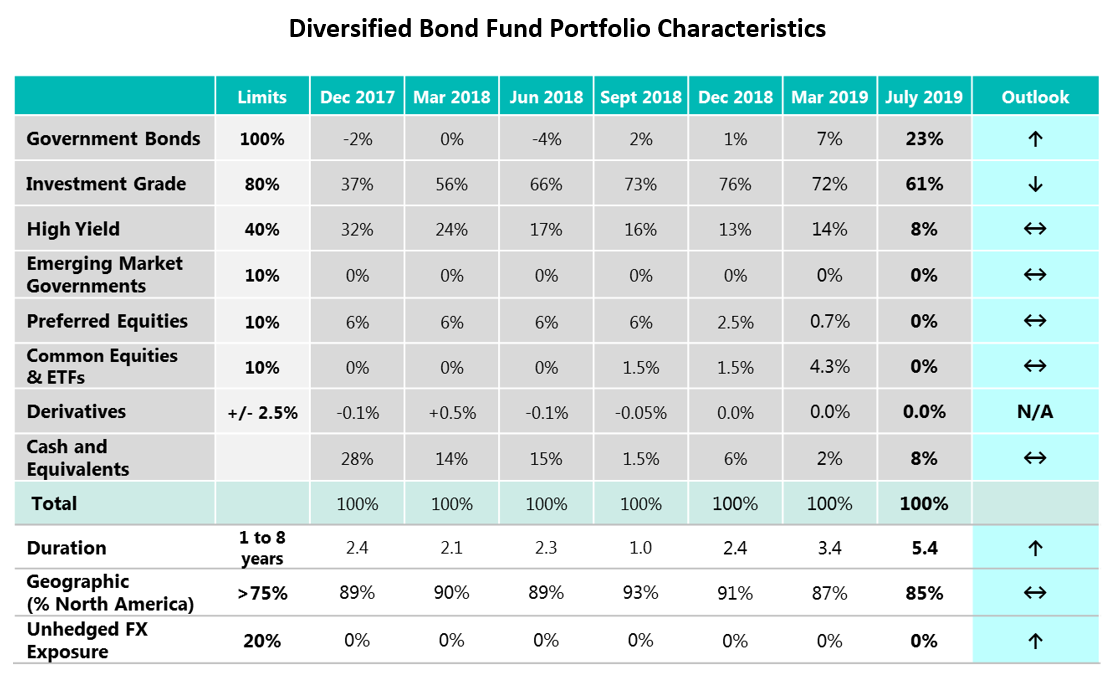 The Credit Opps returned 40bps (Series A) in July. Returns were driven by carry and strong credit performance following Q2 earnings. Leverage remains low and stable, consisting primarily of two to five years’ duration corporate bonds. Consistent with our macro outlook, following month end we increased our allocation to U.S. 10-year government bonds by 20%, taking the fund’s duration up to 3.5 years. We also have a roughly 15% delta notional weight in credit hedges through options and outright short positions in the HYG ETF. Given this very defensive posture, the fund is well positioned to weather the recent market volatility. 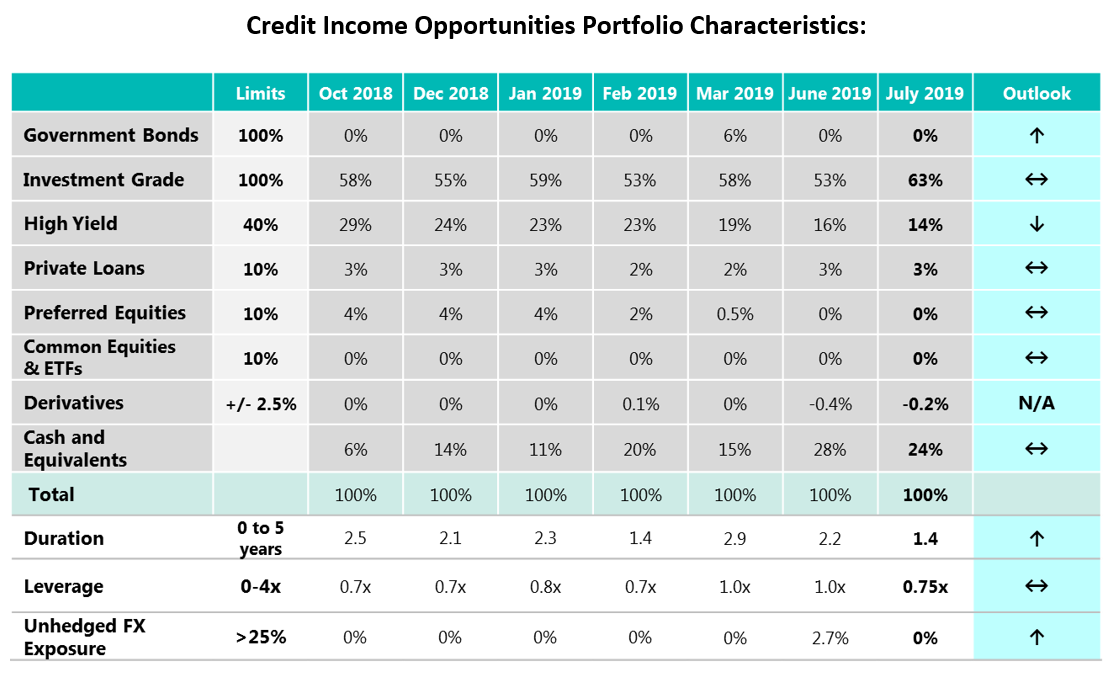 As regular readers will know, we have been quite cautious since the beginning of 2019, gradually de-risking portfolios, taking duration up, spread duration down and allocating more to government bonds. Recent events have only reinforced our conviction in our end of cycle thesis. We continue to be defensive and keep our powder dry for when credit offers true bargains.