The Boy Who Cried Wolf or The Emperor Has No Clothes?

Saudi Aramco held a press conference at ~1:30pm ET yesterday to offer clarification on the status of the Abqaiq processing facility following the missile/drone strike that occurred on Saturday morning. This strike was the biggest geopolitical event for the oil market in modern history and resulted in the largest (temporary) production interruption in history (~5.7MM Bbl/d or 6% of global supply).

Coming into the press conference yesterday we had been told by several consultants with contacts within Saudi Aramco and listened to other experts who collectively said that:

The press conference was epic in its ineptitude. All official commentary was in Arabic, no written communication was offered in English, no questions from the media were asked in English, and the English translation that was being done was voiced over by a very loud Arabic man. The market collectively lost its mind for about 30 minutes as oil nose dived and most of the oil community couldn’t figure out what was being said.

So what did they say? It turns out the press conference was more of a promotional event for the upcoming (?) IPO’ing of Saudi Aramco than being effective at clearing up the confusion in the market (which still remains). Officials downplayed the extent of the damage, thumped their chests about how quickly they were able to put out the (many) fires, and said that full “production” would be up by the end of the month. An important caveat to this is inventory drawdowns are part of their definition of “production” and credible estimates is that their working inventories stand at only 60MM Bbls. Production of 2.5MM Bbl/d was restored with 3.2MM Bbl/d remaining offline. Full “output” (is that well head production or production + inventory drawdowns?) is expected to be back to 100% by the end of September but the possibility of major inventory depletion remains (not that the oil price would tell you this at the moment).

While the oil market is fully believing 100% of this update consultants/experts that I have spoken with are highly skeptical of the above claims. Given that employees were just able to enter the facility yesterday it is estimated to take another 1-2 weeks to fully assess the extent of the damage (there were 19 “points of contact” with missiles/drones with 7 of their 11 spheroid oil and gas settlement vessels and 5 of their 18 oil and gas separation stacks getting hit) hence the Oil Minister’s confidence in his rather bold claims are being politely described as “optimistic.” Further, refineries in Asia have already been told that there will be delivery delays in October (China has chartered 4 VLCC’s to pick up US crude…will be bullish for WTI) and India is reportedly increasing shipments from Rosneft. There are also reports such as this: 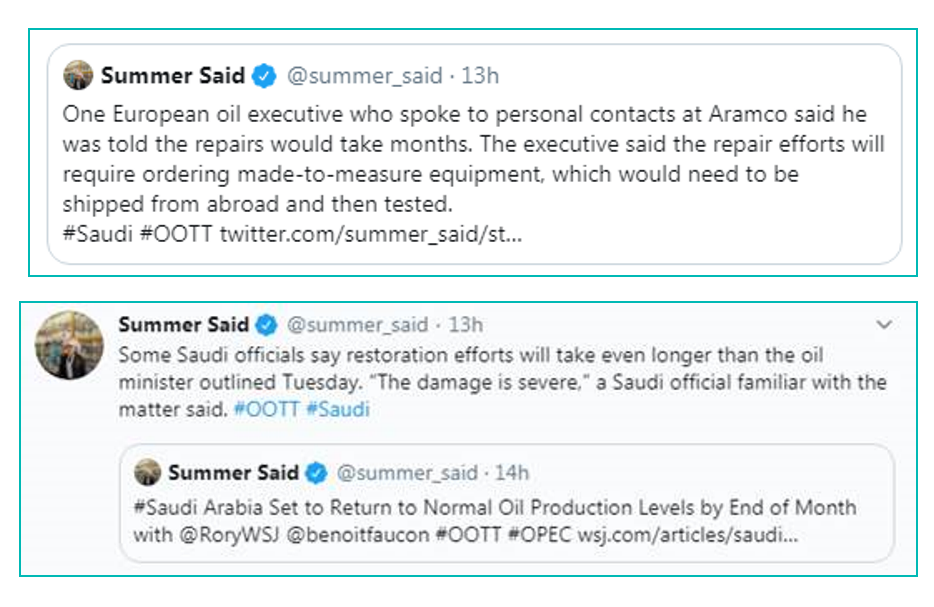 Whether it takes 2 weeks or a month (or longer) to fully restore production is secondary…production was always going to be returned and it was just a question of the extent of the outage and the short-term impact on inventory drawdowns. The real story and implication is this: Middle Eastern tensions are at a boiling point and the holder of all of the world’s spare capacity which was previously viewed as untouchable was shown to be very vulnerable. Why can’t another attack happen? Prior to Saturday the oil price actually had a NEGATIVE political risk premium in it as the market had grown extraordinarily complacent given the ongoing narrative of perpetual US oil production growth and a slowing economy. This should be coming to an end and a risk premium should start to become embedded in the price (especially if another attack occurs…reminder that Saturday’s strike wasn’t the first one this year but rather just the most successful) though this may take some time as the price of oil is now trading at the same levels as before Saturday (!) (adjusted for the selloff that occurred when rumours swirled that the US was about to soften Iranian oil export sanctions and allow them to increase exports by 700,000bbl/d…those worries should now be dead with Trump ordering “substantial increase in sanctions” this morning): 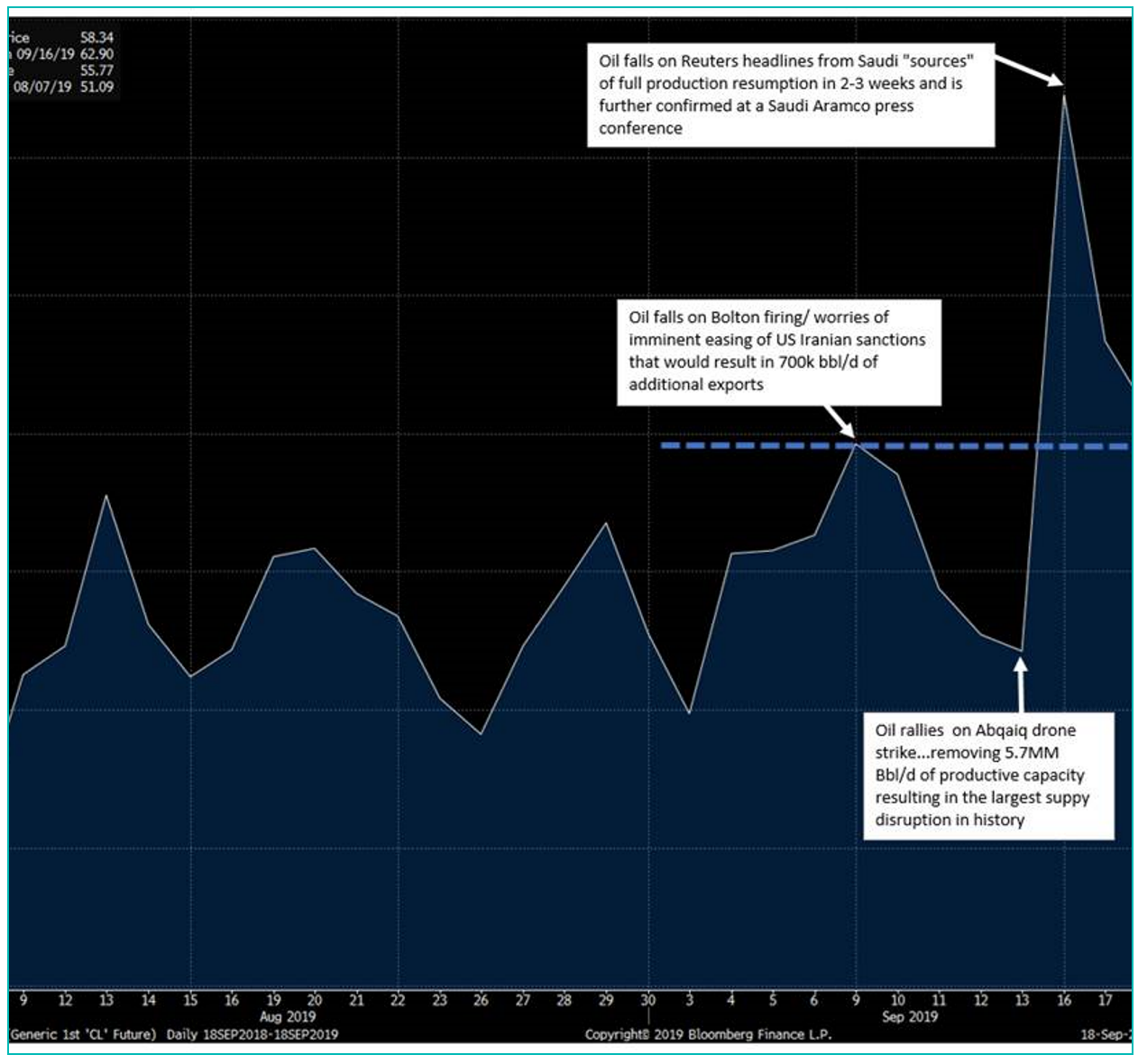 So what happens if the market chooses to ignore all of the above and just pretends that Saturday’s strike never even happened (ie. the largest supply disruption in history)? Then these realities matter again: sharply decelerating US shale growth rates, oil trading below the marginal cost of supply, demand that appears to have improved beginning in June, US inventory levels that are in deficit year-over-year, and energy stocks that are trading at (near) their lowest valuation levels in history: 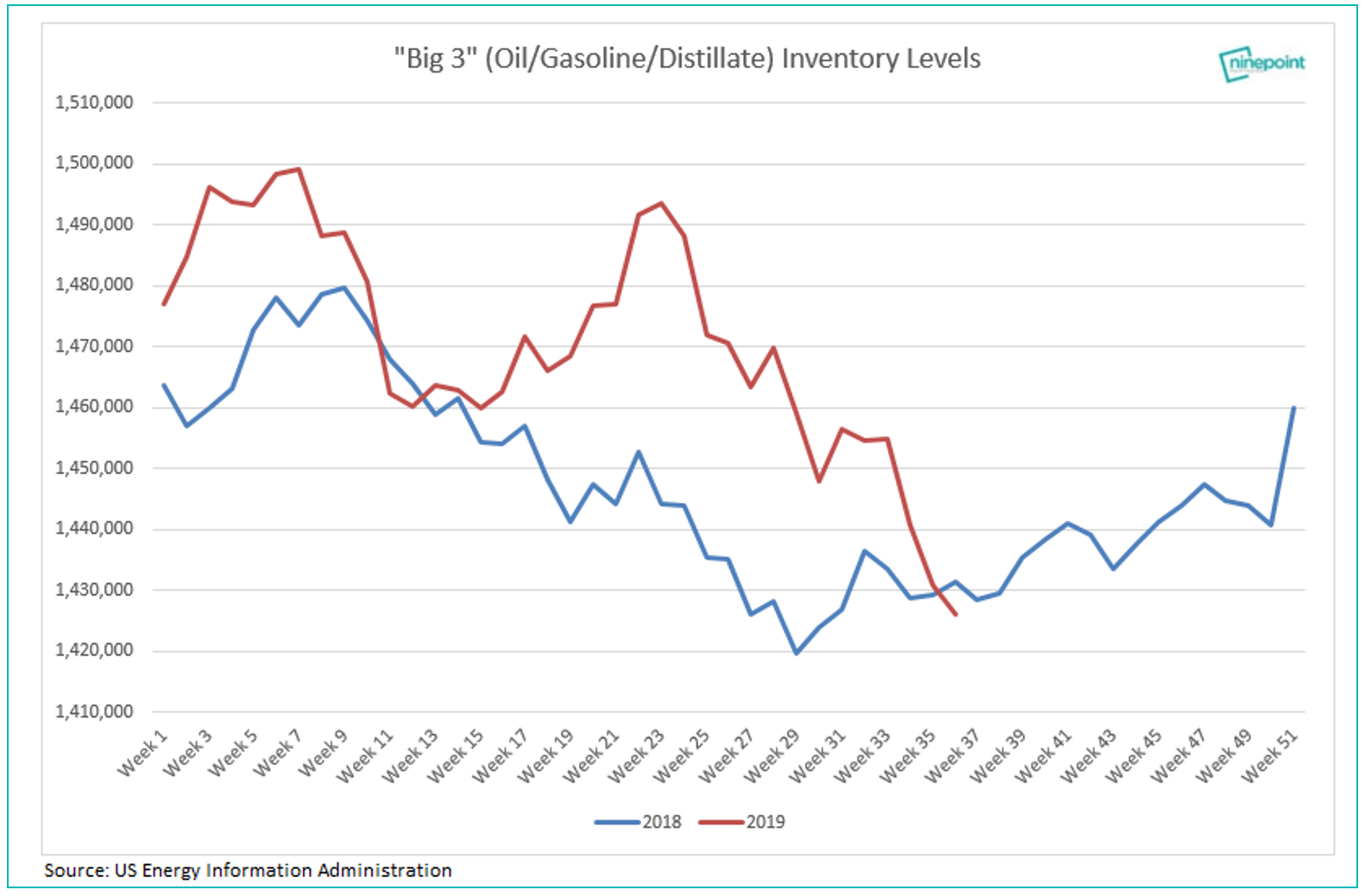 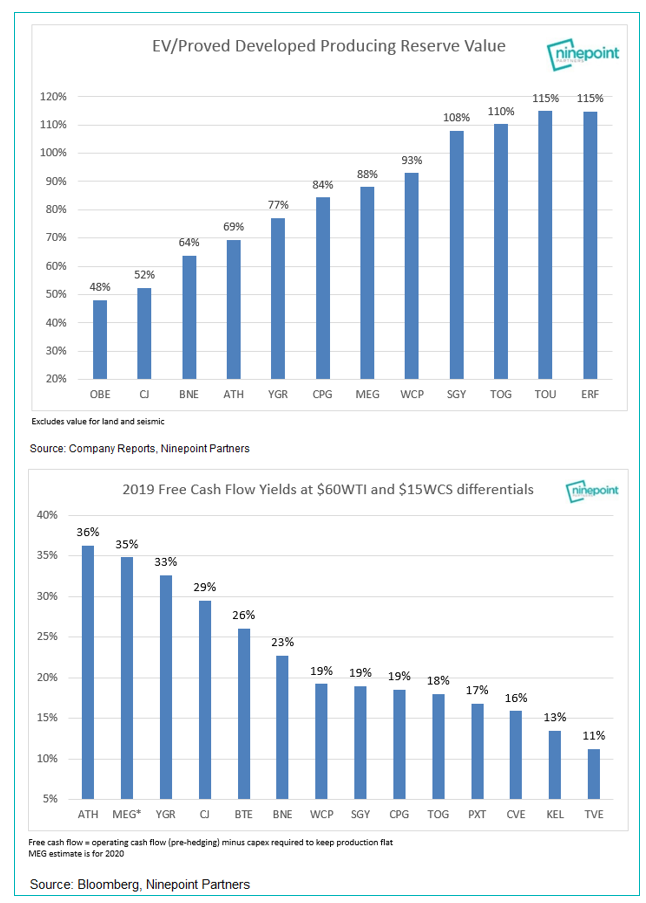 We remain bullish and believe that our ongoing traction with corporates to use their free cash flow for significant buybacks will result in funds flow back into a sector suffering from a serious sentiment problem allowing energy stocks to re-rate and better reflect their long term fundamental value.

Ninepoint Partners LP is the investment manager to the Ninepoint Funds (collectively, the “Funds”). Commissions, trailing commissions, management fees, performance fees (if any), other charges and expenses all may be associated with mutual fund investments. Please read the prospectus carefully before investing. The indicated rate of return for series F units of the Fund for the period ended August 31, 2019 is based on the historical annual compounded total return including changes in unit value and reinvestment of all distributions and does not take into account sales, redemption, distribution or optional charges or income taxes payable by any unitholder that would have reduced returns. Mutual funds are not guaranteed, their values change frequently and past performance may not be repeated. The information contained herein does not constitute an offer or solicitation by anyone in the United States or in any other jurisdiction in which such an offer or solicitation is not authorized or to any person to whom it is unlawful to make such an offer or solicitation. Prospective investors who are not resident in Canada should contact their financial advisor to determine whether securities of the Fund may be lawfully sold in their jurisdiction.