September was a strange month. It started with sentiment and government bond yields at rock bottom, then the prospect of new trade talks in Washington in October (for the nth time) raised hopes, triggering a significant sell off in government bonds (Figure 1), only to be followed with poor data and further acrimonious trade rhetoric. As we have said before, the standoff between the US and China is here to stay and we should expect regular bursts of volatility around this theme. There is no way for us (nor anyone else really) to anticipate these wild swings, so the best we can do is stick to our medium-term thesis.

In the first week of October, incoming data for September continued to show economic softness. The US ISM Purchasing Managers Index (PMI) for manufacturing is at its lowest since 2009 (Figure 2) and the services PMI, while still in expansionary territory, is softening further.

Looking at other indicators of business activity, we found that business loan growth is also softening, with firms holding back investments in the face of uncertainty (Figure 3). 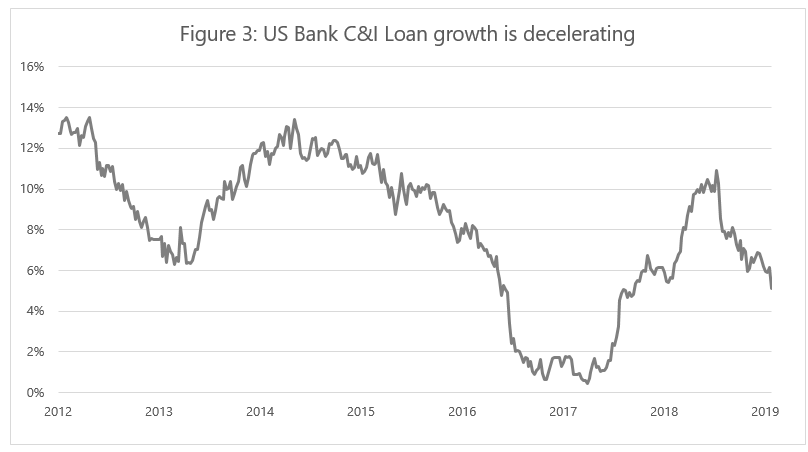 The bright spot in the U.S. continues to be the consumer; personal consumption is responsible for most of the growth in GDP so far this year. However, the labour market has softened materially. Figure 4 below shows the annual % change in average hourly earnings and the 6-month moving average change in US non-farm payrolls. As the U.S. gets closer to full employment (at 3.5% unemployment rate, we could argue we are at full employment), it is to be expected that the pace of job creation would soften. What is striking to us in this chart is that wages, which tend to go up in a tight labour market, have instead started to soften. Perhaps we have reached the point in the cycle where the labour market stops tightening?

We already know from a range of surveys that business confidence has been negatively impacted by the trade wars and that as a result, investment decisions are being deferred. It therefore makes sense for businesses to also defer hiring decisions and, faced with margin pressures due to the tariffs, push back against higher wages. Suffice to say, with investment already slowing, we will be keeping a close eye on incoming consumer data as it will confirm or infirm our end of cycle thesis.

We know the Federal Reserve will be looking for the same signals as us to inform their path forward. For now, having cut rates twice already and signalled their willingness to do more if necessary, we expect the Fed to cut rates again at their October 30th meeting (same date as the BoC by the way, which is quite rare). Also of note, the Fed in the middle of September had to remedy an extremely unstable financial system. A confluence of factors led to a lack of liquidity in the overnight funding markets. Without going into minute details, the result is that the Fed, for the first time since the Financial Crisis, had to intervene in funding markets and inject overnight liquidity. For all intents and purposes, the Fed’s balance sheet has (already) shrunk too much and it now must grow. Indeed, that has already started to happen (Figure 5). 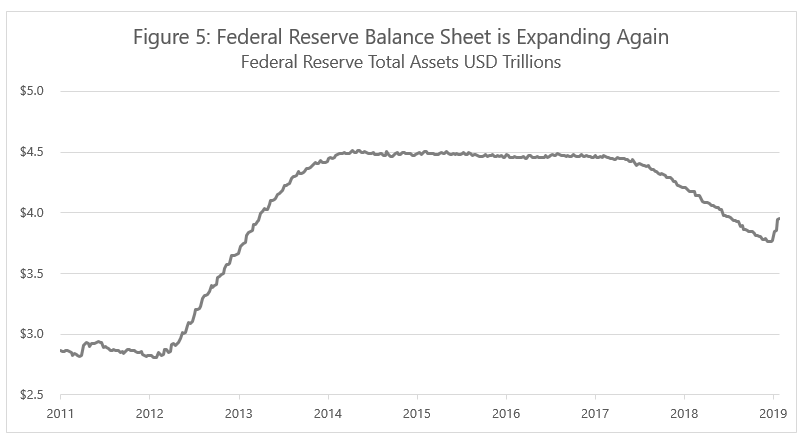 The ECB also had an important meeting in September, where they announced a long-expected easing package. The overnight rate was dropped by 10bps to -50bps and new measures to make these negative rates less onerous for banks as well as a new 20bn Euros a month QE program starting on November 1st. One of the most salient messages from Mario Draghi was the conditional forward guidance that was introduced: as long as inflation is not sustainably at their less than 2% target, they will not raise rates. And as long as they do not raise rates, they will keep the QE program alive. Given the very weak inflation dynamics in the euro-zone (they have not even remotely approached their target in 10 years), the whole term structure of interest rates should flatten towards the overnight rate. After the event, we sold our 10-year French government bonds and bought 30-year bonds as we think there is more price upside as the curve flattens.

With all that monetary easing elsewhere around the world, where does this leave the Bank of Canada? For now, it seems like they are happy to wait and see. The economy is at potential, unemployment is low and inflation at target, so they have very little incentive to spend any of their precious monetary space on “insurance cuts”. Until the data turns for the worse (and follows the rest of the world’s), we expect little action from the BoC.

Finally, the start of the impeachment proceedings against President Trump is yet another source of potential volatility. His erratic behaviour and tweets seem to have taken a turn for the worse. The self proclaimed “stable genius” is in for a test of character.

From a broad perspective, credit continues to behave very well, September was a very active month for new issues as corporates took advantage of low yields, tight spreads and a street starved for product. For example, Bell Canada issued a 10-year bond with a coupon of only 2.99%. However, under the surface, some segments of the credit markets are showing some early signs of strain. Figure 6 below shows credit spreads on various rating sub-segments of the US high yield market (dotted lines represent averages). While the higher quality BB and B rated bonds still trade below their 5-year averages, the riskier C rated portion of the market has underperformed this year and spreads still stand near the highs reached late last year. 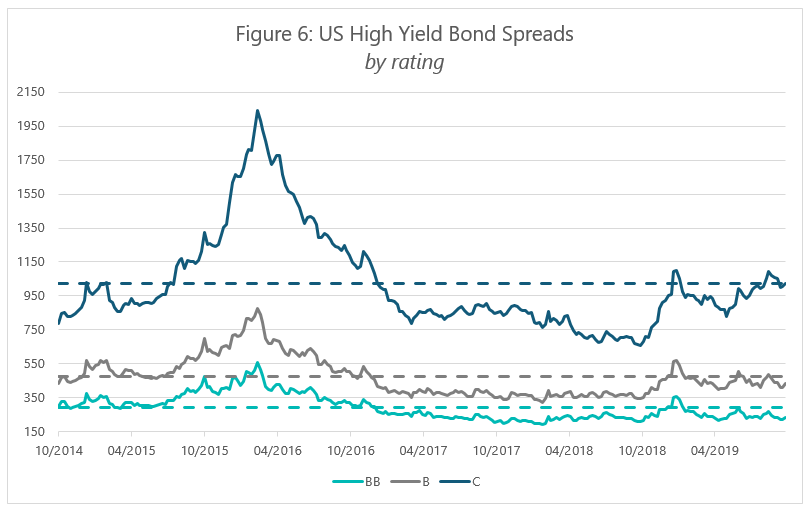 We hear of similar conditions in leveraged loans, where several large issuers now trade at distressed levels. With a decelerating global economy, weak and highly leveraged companies become more at risk of default, scaring investors away. So, for now, the tone is generally good, but under the surface we can distinctly feel investors’ lack of appetite for truly risky credits.

Due to the large sell off in government bonds in September, the fund returned -70bps. However, that is on the back of a 1.89% gain in August, where government bond yields declined very rapidly. Some retracement from very overbought conditions was to be expected. Duration increased slightly to 6.5 years as we switched our 10-year French government bonds into 30-year. Apart from that, there were very few changes made to the portfolio. In credit, we remain cautious with lower duration and higher quality corporate bonds. 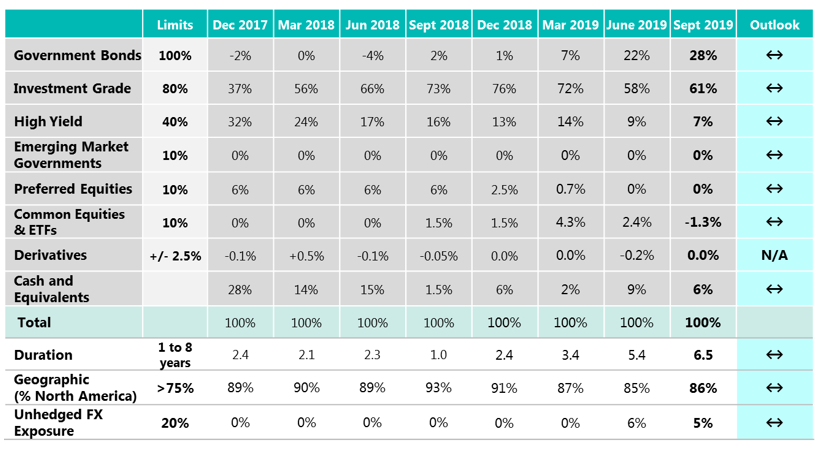 The Credit Opps was down 9bps (Series A) in September, largely due to weakness in our US 10-year treasury notes, offset by strength in our credit positions. There were no major changes in the fund in September, we are comfortable with the current fund positioning and prefer to wait for better opportunities to emerge before making meaningful portfolio construction changes. 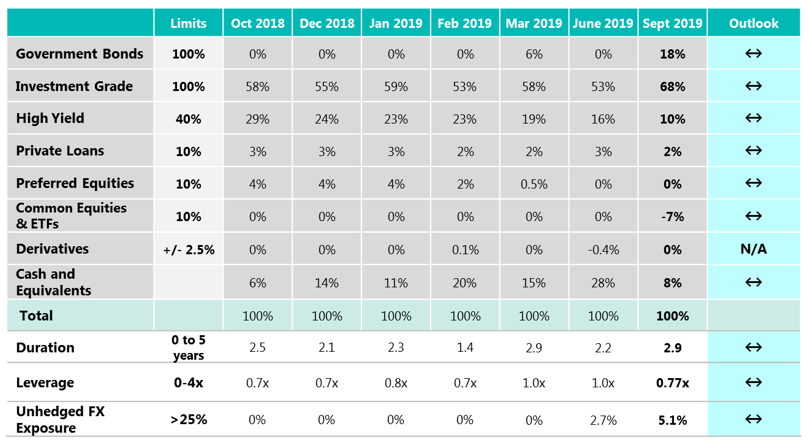 With the deterioration in global economic data, we expect markets to continue to be volatile, both on the upside and the downside. After a strong start to the year, we aim to be prudent and keep the portfolios liquid, so that we can act from a position of strength.