Forecasts often state that cash will be replaced by electronic payment in the near future. While it is true that electronic payment is gaining market share and growing fast, it is unlikely that it will completely replace cash anytime soon. Other current trends, such as negative interest rate and increased cybersecurity concerns, are also keeping the demand for cash at a healthy level.

In fact, the number of bills in circulation has never been so high. In 1990, total currency in circulation in the world passed one trillion United States Dollars (USD). In 2002, this figure was two trillion USD and in 2008, it had increased to four trillion USD. In 2016, the Bank for International Settlements which provides detailed statistics of the worth of bank notes and coins for 18 major currencies used by the member states of the Committee on Payments and Market Infrastructures (CPMI) showed a total value of $4.7 trillion. The countries where people have the most bills are Switzerland, Hong Kong, Japan, and Singapore.

In the US alone, the following graph shows the growth of bills in circulation. 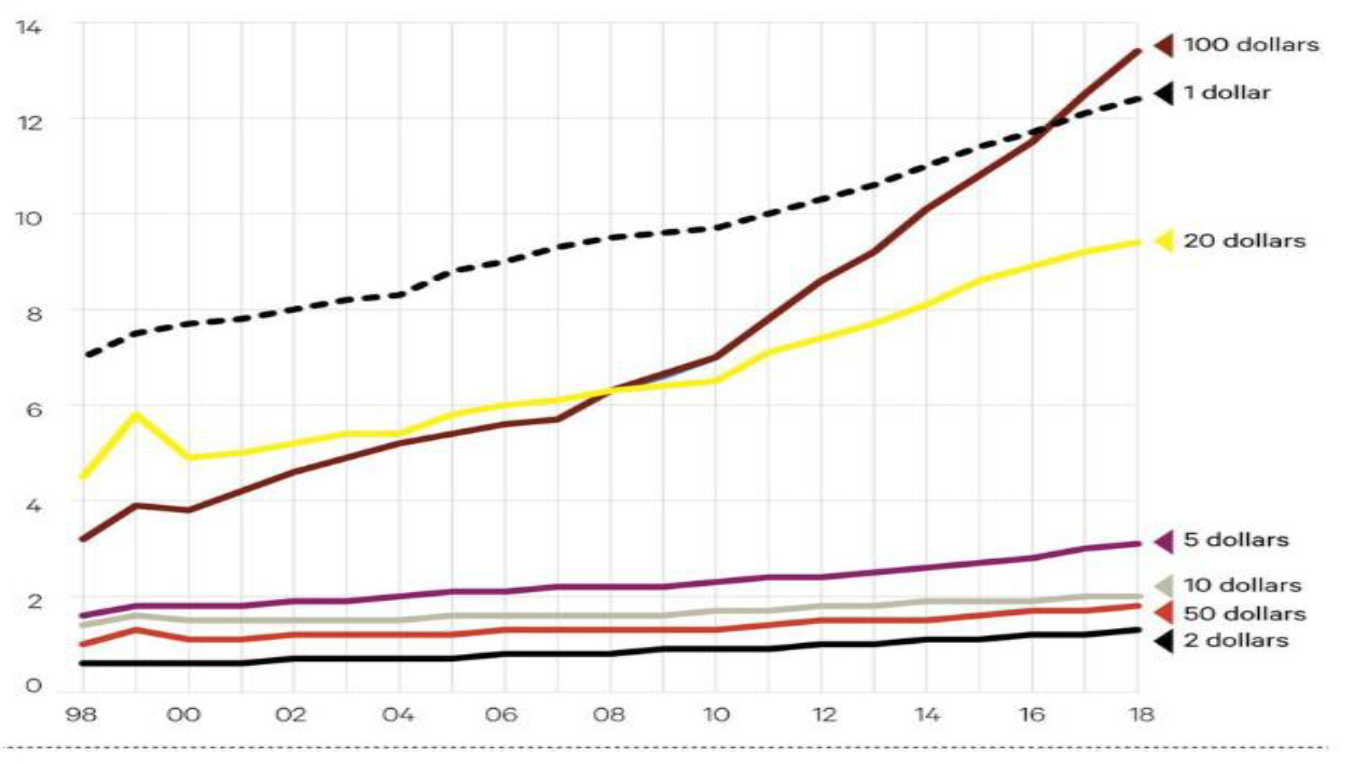 This week we are profiling a recent addition to the international portfolio – Seven Bank. It provides, as the company motto indicates, “Everyone’s ATM network, anytime and anywhere, safe and secure”. We actually re-initiated the position as we held it from April 2012 and sold it in January 2014 as it had exceeded our limit market capitalization. Since January 2014, the company stock price has declined by over 34% as the market fears over the disappearance of cash.

Seven Bank is a licensed bank that operates the biggest ATM network in Japan, with over 25,000 ATMs in all 47 prefectures. Most of its ATMs are installed in convenience stores and supermarkets owned by Seven & I Holdings, and the rest in financial institutions, airports, train stations, hotels, hospitals, office buildings, and shopping centers. In the US, through its FCTI subsidiary, Seven Bank operates around 12,000 ATMs.

The business model is simple - revenue is from ATM fees. Seven Bank is a virtual bank without branches. In Japan alone, it partners with 615 financial institutions and charges them ATM fees if their customers use Seven Bank’s ATMs to withdraw or deposit money. As a bank, it also allows a customer to open an account online and withdraw, deposit, borrow money or even transfer money overseas via its ATMs. Revenue has good visibility. In fiscal year 2019, 829 million transactions were conducted, which is on average 92 transactions per ATM per day. Average transaction charge was ¥135.

On the banking side, the Bank has over 2 million accounts with a very conservative loan to deposit ratio.

In May 2001, Seven Bank was established in response to the voices of many 7-Eleven customers in Japan who said, “It would really be great if there were ATMs in 7-Eleven stores.”

Management is very experienced and stable. Seven & I Holdings is the largest convenience store chain in Japan and the world, and owns 39% of Seven Bank.

The target markets for Seven Bank are large. There are about 180,000 ATMs in Japan and 400,000 in the US. Many Banks, both in the US and Japan are reducing the number of branches and ATMs but want to continue offering convenience to their clients and therefore enter into agreement with Seven Bank allowing their clients to use Seven Bank ATMs. Other Banks like PNC want to expand their geographic footprint, without opening physical branches. Seven Bank ATMs allow PNC clients to do all their banking, including opening accounts or taking loans, from the convenience of an ATM.

The company sees no direct competition. Its business model is unique. Financial institutions tend to reduce their off-branch ATMs because the fees collected are often less than the operating costs due to small scale. Other big convenience stores have ATMs in their stores, but share them with third parties.

Have a great week ahead!

1 All returns and fund details are a) based on Series F units; b) net of fees; c) annualized if period is greater than one year; d) as at August 30, 2019; e) annual returns are from 03/15/2018. The index is 100% MSCI EAFE Small Cap NR USD (CAD) and is computed by Ninepoint Partners LP based on publicly available index information.

Ninepoint Partners LP is the investment manager to a number of funds (collectively, the “Funds”). Commissions, trailing commissions, management fees, performance fees (if any), and other expenses all may be associated with investing in the Funds. Please read the prospectus carefully before investing. The indicated rates of return for Series F of the Funds for the period ended August 30, 2019 are based on the historical annual compounded total returns including changes in [unit/share] value and reinvestment of all distributions or dividends and do not take into account sales, redemption, distribution or optional charges or income taxes payable by any securityholder that would have reduced returns. Mutual funds are not guaranteed, their values change frequently and past performance may not be repeated. This communication does not constitute an offer to sell or solicitation to purchase securities of the Funds.

The opinions, estimates and projections (“information”) contained within this report are solely those of Ninepoint Partners LP (“Ninepoint”) and are subject to change without notice. Ninepoint makes every effort to ensure that the information has been derived from sources believed to be reliable and accurate. However, Ninepoint assumes no responsibility for any losses or damages, whether direct or indirect, which arise out of the use of this information. Ninepoint is not under any obligation to update or keep current the information contained herein. The information should not be regarded by recipients as a substitute for the exercise of their own judgment. Please contact your own personal advisor on your particular circumstances.

Views expressed regarding a particular company, security, industry or market sector should not be considered an indication of trading intent of any investment funds managed by Ninepoint Partners LP. These views are not to be considered as investment advice nor should they be considered a recommendation to buy or sell.