The Ninepoint Gold and Precious Minerals Fund, Series F experienced a robust fourth quarter, appreciating 15.73% over the past three months. The Q4 precious metal equity performance was helped by rising bullion prices as both gold and silver posted meaningful gains from October through December.

2021 has been a frustrating year for precious metal equity investors. We would like to note that while gold finished the year down 3.64% in 2021, the average price of gold was higher in 2021 than it was in 2020. Similarly, the average price of silver was higher in 2021 than it was in 2020. Despite higher average gold and silver prices through 2021, precious metal equities experienced significant declines with the GDX and GDXJ losing 9.52% and 21.25% respectively. These declines had little to do with fundamentals and more to do with sentiment. Precious metal miners continue to generate historically high profit margins while rewarding shareholders with dividends and buybacks. We believe that investors will refocus on the strong fundamentals of precious metal equities in 2022 as both gold and silver bullion appear ripe to resume their climb upward.

In our opinion, the bullish setup of supply and demand for physical metals will be noticed in 2022. While mine supply continues an inexorable decline and even a 25% rise in the gold price ($400-500/oz.) would be unlikely to produce a sufficient supply response. 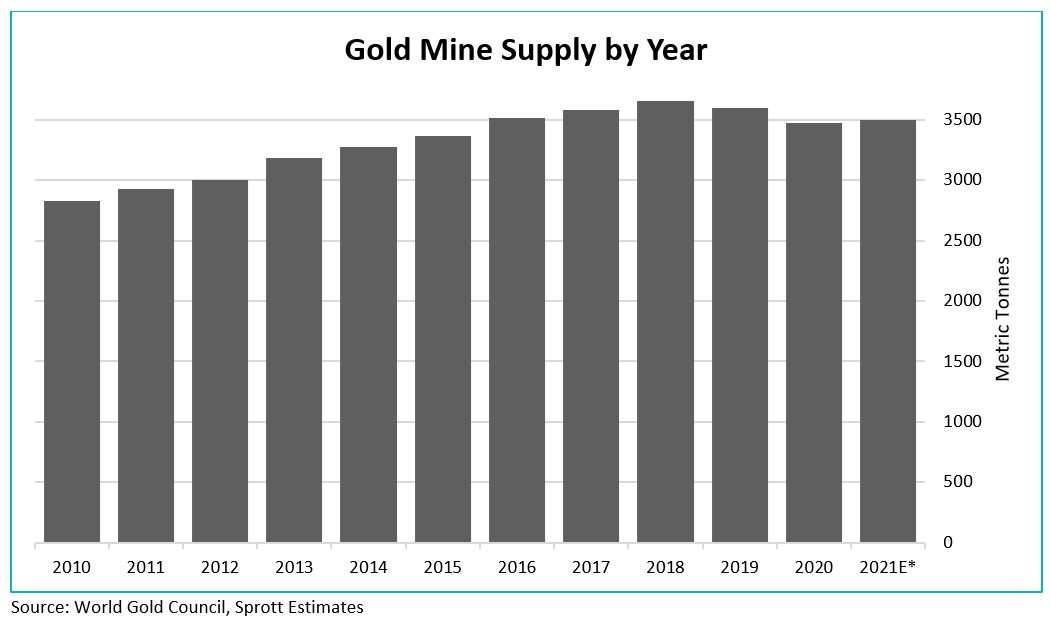 Investment capital to build new production remains too scarce and economically viable projects are too few to change the likely path of world production over that time frame. The footprint of safe jurisdictions in which to invest dwindles with each lurch away from rule of law in locations with good geology and mining infrastructure. Many Latin American, African, and Asian countries, previously considered to be mining friendly, have become less welcoming to the extractive industry of any stripe. The capital required to build new capacity bloats from cost inflation, increased regulatory risk, and stretched time lines to complete construction. Cost inflation has been hitting miners, particularly when it relates to building new projects. CAPEX (Capital Expenditure) overruns are becoming the norm for a number of projects we follow and in certain instances are exceeding the original estimates by more than 50%. Naturally, most precious metal miners are not in an expansionary frame of mind. Instead, they are focusing on maintaining strong profitability and returning capital to shareholders.

The massive surge in investment demand for gold and silver in 2020 gave way to apathy in 2021. We believe that an important factor stopping gold from continuing its climb upward was the lack of demand from Asian buyers as a result of COVID-19 induced lockdowns. The largest buyers of physical gold are India and China. Although COVID-19 managed to subdue demand through 2020 and the first half of 2021, we saw Asian demand return in the back half of 2021. Indian imports appear to have risen to a six-year high as pent-up demand appears to have returned. Through September, Chinese demand had surpassed the total for all of 2020 and could exceed the pre- covid total of 2019. According to the World Gold Council, India and China accounted for 1240 tonnes or nearly 60% of world jewelry demand and 25% of total global demand. The accelerated rate of the last four months from these two countries alone could lead to a 15% demand increase in 2022. At the very least, Asian physical demand has historically tended to put a floor on downside price risk for gold. Through 2020 and 2021, Asian buyers and Western investors have been rowing in opposite directions. This is likely to change in 2022 as Asian buying returns to its historical pace and investment demand across the world ramps up in response to an interest rate environment featuring persistent negative real rates. 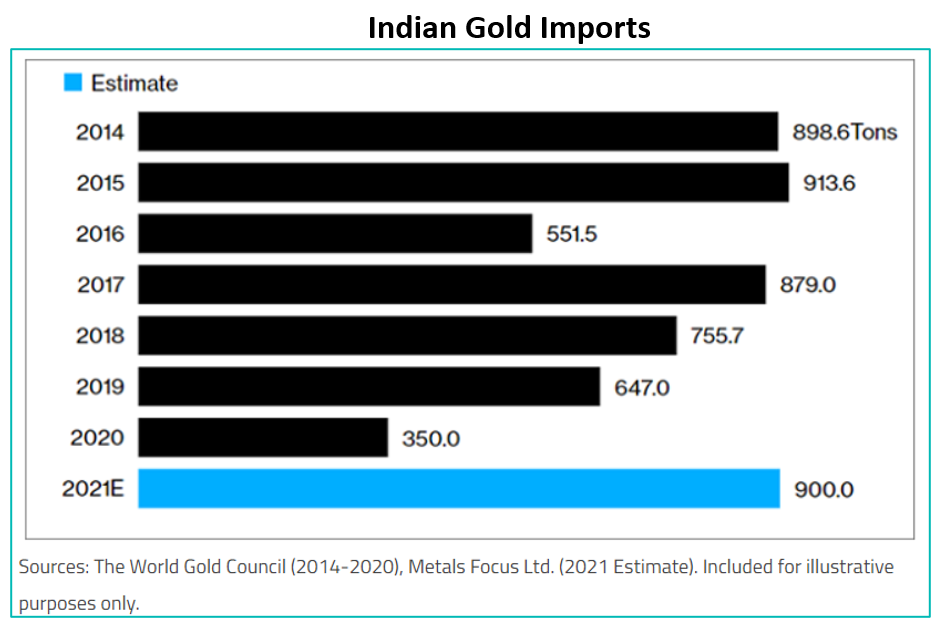 Our previous commentaries have highlighted the rising inflation and the shifting narrative around it. Inflation is no longer described as being transitory and for many countries around the world, inflation is becoming a sore point. Many readers and investors view gold as an inflation hedge and its inability to rise in 2021 has been viewed by investors as a failure of gold as an asset. Granted, we were also expecting gold to respond better through 2021, we tend to agree with the findings of Duke University professor Campbell Harvey and Claude Erb, former commodities portfolio manager at TCW Group. According to them, the metal only protects purchasing power when measured over “very long periods, a century or more…and over shorter periods its real or inflation-adjusted, price fluctuates no less than that of any other asset.” It would be a mistake to position gold narrowly as an inflation hedge. While gold performed well during the inflationary 1970’s, it also did so from 1999-2011 when inflation wasn’t on the front page. Gold is a hedge against systemic risks, which includes inflation, deflation, monetary regime change, or just the plain monetary malpractice which seems prevalent now, and painfully so in countries like Turkey. Closer to home, real rates have firmly been in the negative territory since Q1/2020 as a combination of artificially subdued yields and rising inflation have continued chipping away at the purchasing power of the Dollar. When viewed over the long term, it becomes strikingly obvious that the long-term trend for real rates is downwards.

The explosion of debts taken on by developed economies can only be supported by low nominal rates and negative real rates. Any material increase in interest rates would be calamitous for most developed economies that have struggled to generate meaningful GDP growth. One of the side-effects of low nominal rates in the developed world has been asset price inflation. The appreciation of equities and real estate has not gone unnoticed by anyone. We can’t help but notice that the expansion of the Fed balance sheet has been closely correlated to the rising equity prices. The recent rise in equities in particular has been driven by more multiple expansion than by rising profitability. 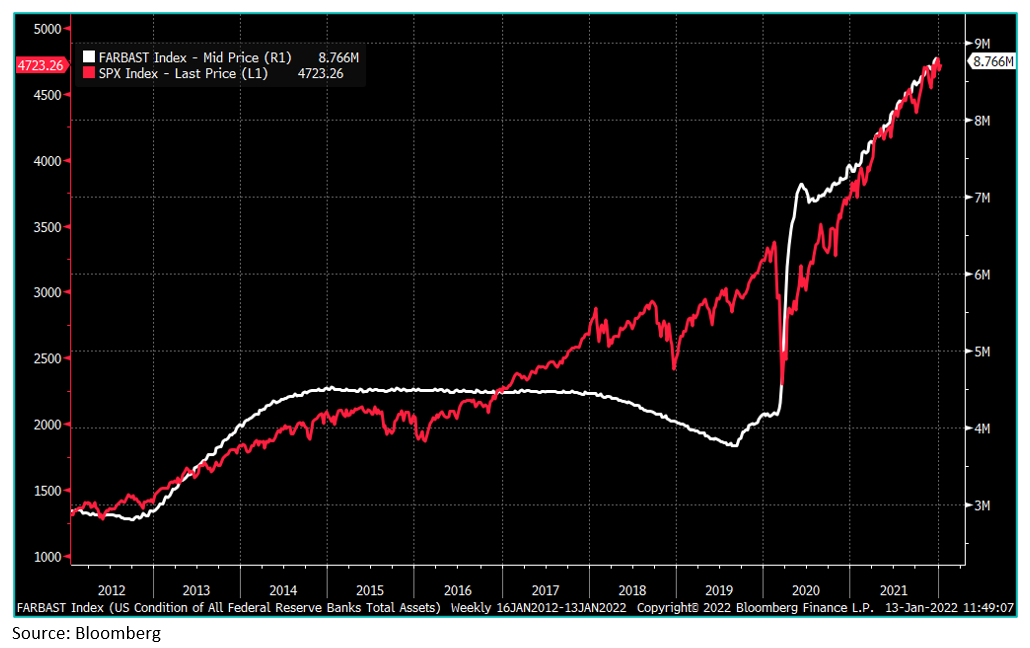 In addition to sovereign nations, corporations have binged on debt enticed by the low interest rates, with a sizeable portion of the debt going towards share buybacks, further fueling the sky-high valuations we see today. Over the past 10 years, US corporate debt has increased by almost 80% as have valuation multiples. It goes without saying that a material increase in nominal rates would not only hamstring national economies but also cause great pain for a vast majority of corporate borrowers, which currently trade at astounding valuations. It is our contention that real rates are likely to remain be depressed and could even head lower over a protracted period of time. Simply put, there are two alternatives for the Fed and the ECB. The first one is to march nominal rates higher and quash inflation, which at the time of writing is expected to reach 7% in the US and 5% in the Eurozone, but drag their respective economies through a painful and protracted recession while deflating asset bubbles. In simple terms, the remedy for persistent inflation is poison for high valuations.The second alternative is to maintain nominal rates lower than inflation, allowing asset bubbles to get bigger and systemic risks to grow. When inflation translates into systemic risk, gold becomes relevant. In our judgement, the current round of high inflation has the potential to topple financial markets. From Paul Volcker’s memoirs: “The real danger comes from the Fed encouraging or inadvertently tolerating rising inflation and its close cousin of extreme speculation and risk taking, in effect standing by while bubbles and excess threaten financial markets”. We should note that while the Fed is alarmed by the rise in inflation, their upcoming foray into hawkish territory is likely to remain behind the curve before the next recession emerges and they are forced to pivot. While most investors tend to see increase in Fed rates as being a negative for gold, the opposite has been true. Gold has performed admirably through the previous four rate hike cycles.

The most recent Fed interest rate hike occurred in December 2015, the same month gold put in its recent bottom. Looking back further, gold emerged from its period of consolidation in 2004 as the Fed began raising the benchmark rate from 1.25 in September 2004 to 5.25 by June 2006. Through this period, the price of gold increased by almost 50%. The error prone Fed has typically been behind the ball and will likely produce even more errors. Heading into 2022, precious metals remain a potent hedge against systemic risks and monetary malpractice. This is gold and silver’s time to shine.

Ninepoint Partners LP is the investment manager to the Ninepoint Funds (collectively, the “Funds”). Commissions, trailing commissions, management fees, performance fees (if any), other charges and expenses all may be associated with mutual fund investments. Please read the prospectus carefully before investing. The indicated rate of return for series F units of the Fund for the period ended December 31, 2021 is based on the historical annual compounded total return including changes in unit value and reinvestment of all distributions and does not take into account sales, redemption, distribution or optional charges or income taxes payable by any unitholder that would have reduced returns. Mutual funds are not guaranteed, their values change frequently and past performance may not be repeated. The information contained herein does not constitute an offer or solicitation by anyone in the United States or in any other jurisdiction in which such an offer or solicitation is not authorized or to any person to whom it is unlawful to make such an offer or solicitation. Prospective investors who are not resident in Canada should contact their financial advisor to determine whether securities of the Fund may be lawfully sold in their jurisdiction.